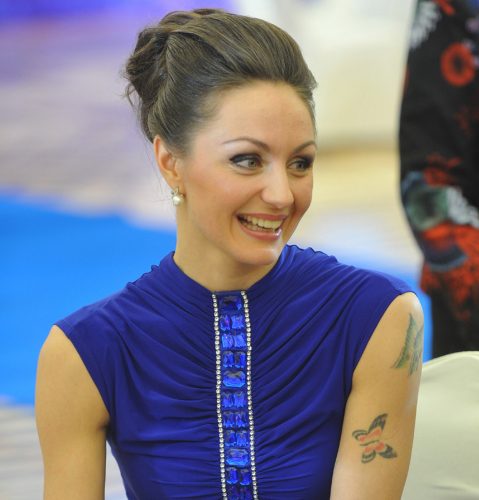 Anastasia Semyonovna Davydova was born on February 2, 1983 in Moscow.she is a Russian competitor in synchronized swimming and five-time Olympic champion.

In a sport that usually forces athletes to be patient as they build international reputations, Anastasia Davydova did not have to wait very long to move to the top. She won her first international medal as an 18-year-old at the 2001 World Championships in duet with her partner, Anastasia Ermakova. In 2002, at 19-years-old, the pair became European champs. The two started working and competing together as juniors in 1998; because they were very successful, judges were already familiar with them by the time they became seniors.

Davydova—nicknamed “Asya”—began taking synchronized swimming lessons at age 6, when her parents first took her to the nearby pool. An only child, she attended a special sports school in Moscow, which she graduated from in the spring of 2002. She went on to study at the Moscow Institute of Economics, Politics, and Law. Davydova took a break from synchronized swimming in 2009 and started coaching young athletes at her hometown club. She has a tattoo of 17 butterflies on her back that has to be covered up before competition.

At her first major senior international event, Davydova placed second with Ermakova in duet at the 2001 World Championships in Fukuoka, Japan—the only team to beat them was the Japanese pair. At that event, she also led a team of juniors to the world title in the team event. Later that year, Davydova claimed the junior world championship with Ermakova in duet. She won her first senior championship gold medal with Ermakova at the 2002 European Championships in Berlin, where they performed a nearly flawless routine (including five perfect 10s in the final free program). Davydova then went on to claim the team title in Berlin with two perfect 10s. At the 2003 World Championships in Barcelona, Davydova and Ermakova won their first senior world duet title; the Russian team was also victorious. Davydova won team and duet at the Olympic qualifying tournament in Athens in April 2004 and the European Championships in Madrid in May 2004.

With Ermakova, Davydova won gold in Athens with an impeccable routine, scoring a perfect 50 for artistic impression (receiving a score of ten from all five judges). The pair again won duet gold in Beijing, earning a combined 99.251 and all perfect 10s for technical merit. The Russian team also won gold in 2008, leaving Davydova with a record four gold synchro medals.

After Ermakova retired, Davydova stepped aside to make room for a new duo. Today, she still competes with the Russian team. She could tie the synchronized swimming career medals record if the Russian squad places in the team competition, and a first-place finish would place her on top of the career gold list. London will be Davydova’s third Olympic Games.

Davydova and her longtime duet partner, Anastasia Ermakova started competing together as juniors in 1998. In 2001 they won their first international medal by winning silver in duet at Worlds. A year later they won their first senior national championship gold medal at Europeans in Berlin, where they performed a nearly flawless routine (five perfect 10s in the final free program). The duo went on to claim the duet title at the 2003 Worlds in Barcelona, where the Russian team was also victorious. As for training, they generally spend eight hours in the pool each day and spend an additional ten hours a week training out of the pool. Davydova lives with her team at a training camp outside of Moscow.

Davydova started synchronized swimming when she was six years old after her parents took her to a nearby pool. Growing up in the sport, Davydova graduated from Moscow University in 2002 with a degree in economics.Her height is 5’6” (1.69 m) and she weighs about 119 lbs (54 kg).