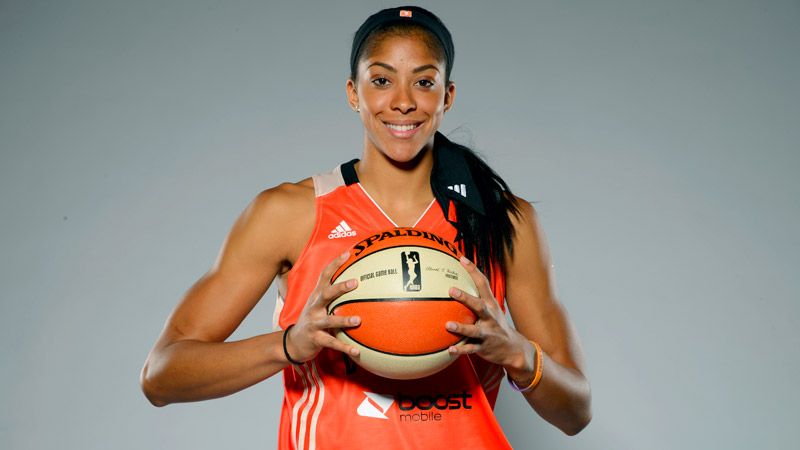 Candace Parker is a WNBA star, currently playing for the Los Angeles Sparks. During the WNBA’s off-season, Candace also plays for the Euroleague’s UMMC Ekaterinburg club in Russia.

WNBA: Candace was selected as the 1st overall pick in 2008 WNBA Draft by the Los Angeles Sparks on April 9, 2008. She immediately made her mark on the WNBA by recording the best rookie debut in league history (34 points, 12 rebounds and 8 assists) in a victory against the defending champion Phoenix Mercury . Candace finished the year leading the WNBA in rebounds and double-doubles and averaged 18.5 ppg, 9.5 rpg while sharing the court with WNBA All-Stars Lisa Leslie and Delisha Milton-Jones.

At the end of the season, Candace earned both the 2008 WNBA Most Valuable Player award and the league’s Rookie of the Year award. Candace is the only player in the history of the WNBA to capture the league’s MVP award as a rookie.

During her rookie season, she also became the second player to dunk in a WNBA game and the first player in league history to dunk in multiple games.

At the beginning of her second season, Candace gave birth to her child first child, Lailaa Nicole Williams, in May of 2009. Her 2009 season served as an inspiration to many women, as she was able to juggle the birth of her first daughter and the rigors of WNBA play. Despite missing eight games due to the birth of Lailaa, Candace still led the WNBA in double-doubles. She also finished the year as the WNBA’s leader in rebounds per game.

The 2010 season, her third – Candace competed in the first ten games, but missed the remainder of the season after undergoing surgery on her left shoulder. She finished the season averaging 20.1 points, 10.1 rebounds, 2.2 assists, 2.2 blocks and 1 steal per contest. Candace missed much of the 2011 season due to a torn meniscus.

Candace returned to play the full season in 2012. She average 17.4 points per game, 3.3 assists, and 30.7 minutes a game while leading the Sparks to the second seed in the West. She also led the league in blocks and defensive rebounds.

2013 marked Candace’s sixth season in the WNBA as well as her second MVP win. She received the second most fan votes to become a starter in the All Star Game, and was later named All Star MVP. She finished the season averaging 17.9 points and 8.7 rebounds a game.

This past 2014 season, Candace posted a team-high 19.4 points and 4.3 assists per game.She finished third in the league in scoring, as well as marked her 5th All-WNBA selection. 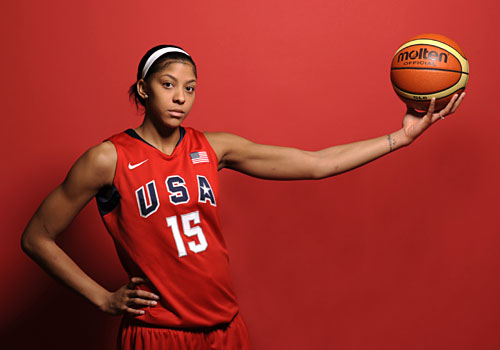 EUROLEAGUE: From January to May each year during the WNBA’s off-season, Candace plays for UMMC Ekaterinburg franchise in Russia. In her first season with UMMC, she led her squad to the 2010-14 Russian Cup as well as the 2010-13 Russian League championship.Candace also led the team to the 2013 EuroLeague Women’s Championship. Candace has ranked the highest field goal percentage (62.3%) in the EuroLeague.

FIBA/USA BASKETBALL: As a member of Team USA, Candace earned a gold medal during the 2008 Olympic Summer Games in Beijing, China. She contributed 14 points in the final game versus Australia, helping the U.S. Women’s basketball team capture their fourth straight gold medal.

In September 2007, Candace led the USA Women’s Senior National team to a gold medal at the FIBA Americas Championship and an automatic berth to the 2008 Olympic Summer Games. She led the 2007 squad in steals (12), blocks (4), scoring (69-13.8 ppg) and started all five games for the United States.

When selected to the USA Women’s Senior National team in September 2006, Candace became the youngest member of the squad since 1994. She helped guide Team USA to a bronze medal in Brazil, where she set a new American record for blocks in a tournament (14). Candace led the Women’s Senior National team in points (18) and ranked second in rebounds (8.4) and earned a spot on the five-member All-Opals World Challenge Team in April 2006.

Candace also joined the team at the 2012 London Olympics, helping them keep the title and win gold again. She led the team in points (21) and rebounds (11) to clinch the final game against France.

NCAA: Candace competed at the NCAA level for Coach Pat Summitt and the University of Tennessee Lady Vols. As a Lady Vol, Candace became the first woman to dunk in an NCAA game and the first woman to dunk twice in a single NCAA game. She won back-to-back NCAA championships with the Lady Vols in 2007 and 2008, leading the team in scoring (20.6ppg) and rebounds (8.8) her final season at Tennessee. Candace was also named the 2007 and 2008 Collegiate Female John R. Wooden Player of the Year, State Farm Player of the Year, Basketball Writers Association National Player of the Year and Kodak All-American. She earned the NCAA Final Four MVP award in both 2007 and 2008.

HIGH SCHOOL: A native of Naperville, Ill, Candace became a national sensation at Naperville Central High School, helping the school capture girls’ basketball state championships in 2003 and 2004. She was twice chosen as both the Naismith and Gatorade Prep Player of the Year (2003 and 2004), and became the first woman to ever win a slam dunk contest when she won the 2004 McDonald’s All-American Slam Dunk Contest. In that contest, she bested several future NBA players, including J.R. Smith and Rudy Gay.

PERSONAL: Born on April 19, 1986, Candace is the youngest of Larry and Sara Parker’s three children. Her older brothers are Marcus and Anthony (Anthony played in the NBA and retired in 2012).

Candace is married to NBA player and former Duke University All-American, Shelden Williams (who currently plays for the Tianjin Ronggangv team in China). They have one daughter, Lailaa Nicole Williams.

Candace enjoys spending free time with her family and two dogs, cooking, watching football and her favorite TV show “The Game” and competing in just about everything. She also enjoys watching the show Yo Gabba Gabba with her daughter Lailaa.

Candace graduated from Tennessee with a major in Sports Management and a minor in Psychology. She has volunteered her time and support to D.A.R.E, Loaves & Fishes, PETA, the March of Dimes and the Ronald McDonald House.