These exceptionally talented and accomplished female basketball players are an inspiration for millions of young women, who wish to take up the fierce sport of basketball and consider these stars as their role-models. 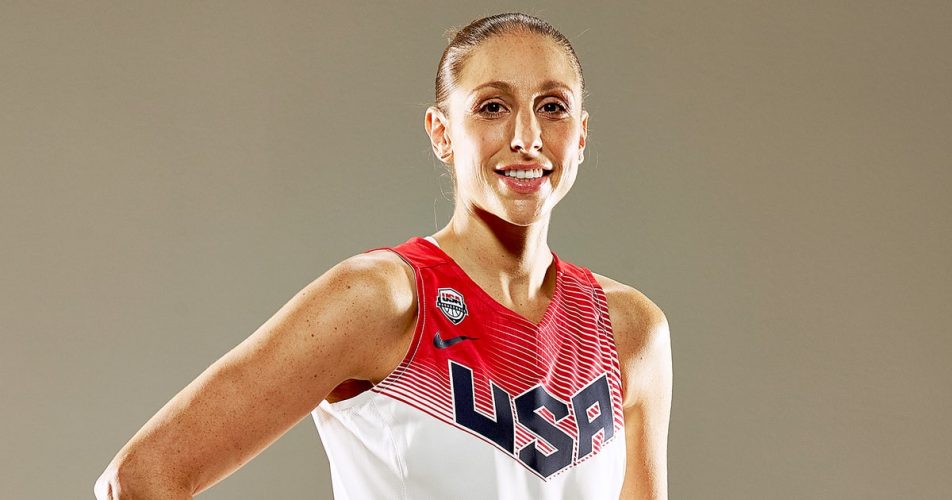 Diana Lorena Taurasi (born June 11, 1982) is an American professional basketball player for the Phoenix Mercury of the Women’s National Basketball Association (WNBA) and UMMC Ekaterinburg of Russia. She was one of the WNBA’s Top 15 Players of All Time in 2011.

Before the start of every game, sitting still is a physical impossibility for Diana Taurasi. She’s too pumped. Locked-in. Tunnel vision.

Taurasi excitedly taps her feet as she listens to her teammates’ names announced on the loud speaker. Rather than consciously wait until her name is called with the spotlight shining solely on her, as soon as the player’s name before her is announced, Taurasi has already joined the huddle with the rest of the team.

Individual accolades and notoriety matters not to Taurasi. Winning does.

Like a light switch, when that first whistle blows, the modest, kind-hearted kid from Chino, CA becomes the “White Mamba” (a label appropriately given to her by the “Black Mamba” himself, Kobe Bryant). But unlike Dr. Jekyll’s intrinsic Mr. Hyde, Taurasi’s transformational potion is the game of basketball itself. That, in essence, defines Diana Taurasi, regardless of what you call her (the White Mamba, DT, Dee, G.O.A.T., etc.). She’s a dichotomy that exists in two personalities, expresses herself as two characters.

The White Mamba is her on-court persona: The hands-down, best female basketball player in the world. Some argue she is the best basketball player. Period. She’s competitive, driven, brash – an uber-talented beast on the hardwood. And then there’s Dee, the long-haired, humble, friendly, wide-smiled, charismatic, hilarious, enchanting woman who brightens every room she enters and loves nothing more than a great meal with friends and playing with her dog, Messi.

Both are captivating. Both are engaging. Both are impressive and endlessly quotable. Both absolutely love – love basketball. Most people know DT. Her mark on basketball is nothing short of Jordan-esque. She became a household name while starring for UConn. She was Naismith Player of the Year three times (’02, ’03, ’04). It wasn’t just that she led UConn to three national titles and a then-record 70-game win streak. But it was how she did it. Taurasi dominated with a certain flair, a certain intensity, a certain competitiveness. And she boasted a skillset yet seen in the women’s game.

No look passes. Incredible range on her jumper. Visible emotion. A ferocious competitor, DT was born to compete and fan or foe, when you witness her love for the game, you can’t help but love her game right back.

“When she’s playing, she has a sparkle in her eye,” newly retired, Hall of Fame-bound point guard Steve Nash told AZ magazine. “She’s totally in the moment. Whenever you see someone who loves what they do, it’s inspiring.”

After winning a gold medal with Team USA in Athens, Taurasi took over the WNBA. She was named Rookie of the Year and first-team all NBA. It was the fitting start to a player who would be so special that she was named to the WNBA All-Decade team after just two seasons in the league. Taurasi is now a seven-time All-Star, a record nine First Team All-WNBA selections, a three-time WNBA champion and the 2009 WNBA MVP. She was MVP of the 2009 and 2015 WNBA Finals. 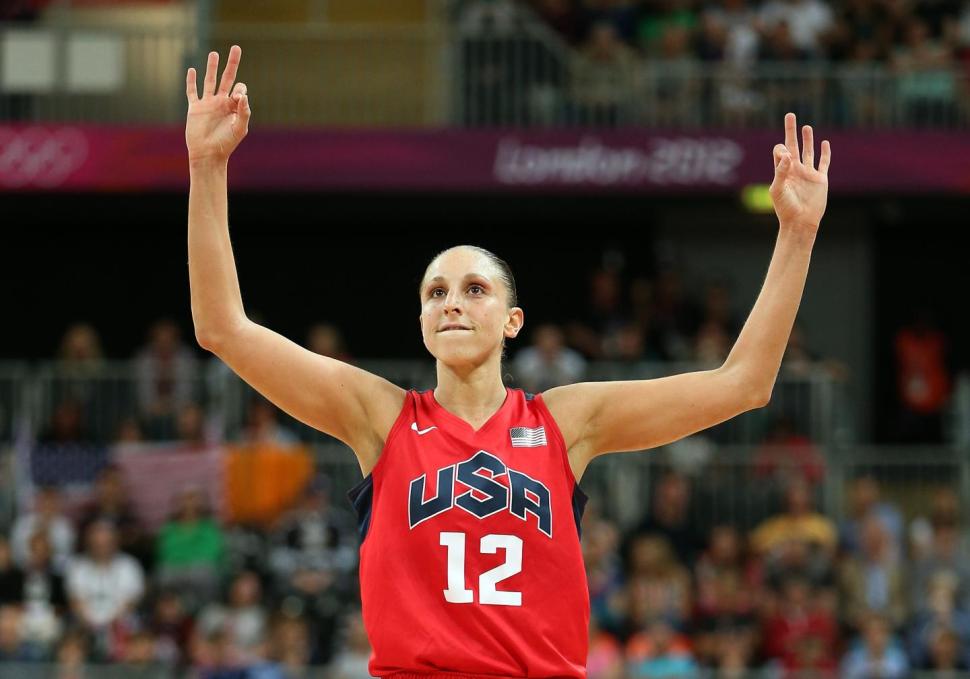 “In the decisive Game 5 finale,” Sports Illustrated’s Jackie McCallum wrote in her Nov. 2009 piece. “Taurasi scored a game-high 26 points and made four of her last five three-point attempts. Why? Because that’s what she does. It’s part of the cutthroat brio that defines her.”

In the 2014 WNBA Finals, after going scoreless in the third quarter, Taurasi added a new chapter to her legend going 5-for-6 in the fourth quarter for 14 points, including an and-1 with 14 seconds left to put the Mercury ahead for good. She ended the game with 24 points, as Finals MVP and as the leading scorer in WNBA Finals History.

Phil Jackson called her a “shark” on Twitter after the game. ESPN’s Mechelle Voepel wrote, “Big moments do not find Taurasi. Its most definitely the other way around. She hunts them down relentlessly and seizes them.”

She is the Phoenix Mercury’s all-time leading scorer, has won the WNBA scoring title five times, has the most 30+ point scoring games in league history, scored 6000 pts faster than any player in league history and holds the WNBA record for scoring average over a season (25.3). DT also dominates internationally.

She won four straight Euroleague championships and was named European Player of the Year three straight seasons (2007, 2008 and 2009). In London 2012, she led her team to Olympic Gold – her third after securing the same in Beijing 2008 and Greece 2004. In 2013 she captured her fifth Euroleague title, leading UMMC Ekaterinburg to the 2013 Euroleague Championship.

But adding to what she does is how she does it. The jaw-dropping fashion with which she plays has made her one of today’s most popular athletes. espnW named her one of the five most “Important Female Athletes of the Past 20 years” with Kate Fagan writing, “Diana Taurasi is the most exciting basketball player of her generation. Not only has she won everywhere she’s been…but she has done so with a kind of flair we rarely see. She has given us moment (who could forget “the kiss”?) as well as steady greatness.”

Her fame and charisma have landed her endorsements, including the likes of Nike and got milk? She was voted by AZ Magazine as Arizona’s Most Intriguing Person and graced their December 2009 cover. She has twice been on the cover of Sports Illustrated and three times on ESPN the Magazine – in 2012, in jaw-dropping fashion as the cover of their Body Issue.

It is in through these avenues that the viewing public gets a glimpse at DT. Yet, it’s the Dee that many don’t see that truly sets Taurasi apart. Dee’s the one who signs autographs even for the opposing team’s fans who jeered her, talks to every kid, plays soccer on the court after practice with whoever’s around and makes every person she meets feel like the center of the universe.

It’s this lesser known side that makes Diana Taurasi the best female basketball player in the world. It’s this side that motors her unmatched work ethic and arguably, her status as world’s best teammate.  “Diana Taurasi has changed the game of basketball. When her playing days are done, no player will ever compare to who and how Diana Taurasi has played the game,” said living legend and current Mercury Vice President, Annie Meyers. “Her shooting, her all-around game, her will to win, her clutch shots, teamwork, and leadership. She makes everyone around her better and gives her team the credit.”

It’s this strength of character that is revealed not just through Taurasi’s success, but through her response to adversity. In the face of every challenge, Diana has responded with honesty, hard work and renewed appreciation for the game.  Her commitment meant hours in the gym, supplemented by a heavily organic and veggie-rich diet free of fast food. Over the last few years she has shaved over 20lbs from her frame. The result is the best basketball of her life and on the medal stand in London, tears of appreciation streamed down her face. Only those who didn’t know her were surprised.

Taurasi believes her will and determination are rooted squarely in her upbringing. Her mother Lili is a spirited Argentine and her father, born in Italy, was raised mostly in Argentina where he became a professional goalie. Spanish was the first language she spoke. The Taurasi home is full of love, food, soul and a forest of trophies (punctuated by a pile of championship rings). Yet, when she considers what made her, it all comes back to her father and his work ethic.

“Every single day of his life my father wakes up and goes to work,” Taurasi states. “Tired, sick, missing fingers – he always gets up and punches his card in. His respect for work and his persistence have really influenced the way I approach what I do. He works hard because that’s who he is.” This combination of DT (the sensational baller known for her winning and flair) and Dee (the fun-loving and compassionate woman so easy to relate to) has produced legions of fans and advocates. They crowd the message boards and they chatter in awe after games where her dominance has become so rote that the word “icon” alone fails to capture what she means to basketball.

It’s the love in Magic and the assassin in Kobe incarnate. It’s a combination of opposites rivaled only by the greatest names in all of sport and if today, you see her – count yourself witness. She’s that good.