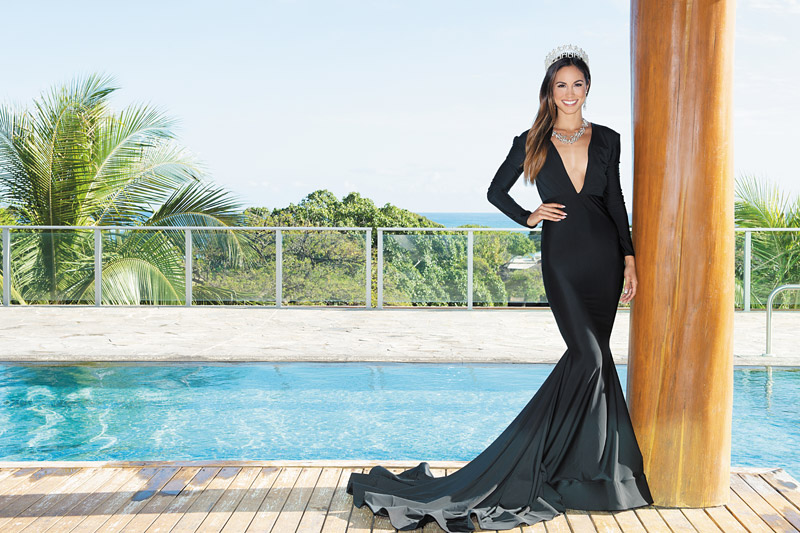 Chelsea Hardin is an American public speaker, model and beauty pageant titleholder who was crowned Miss Hawaii USA 2016. She was the first runner-up to Deshauna Barber of District of Columbia at Miss USA 2016.

Hardin represented East Oahu at Miss Hawaii USA 2016 on November 22, 2015, and was crowned the winner by outgoing titleholder Emma Wo.

On June 5, 2016, Hardin competed in the Miss USA 2016 pageant in Las Vegas, Nevada. She went on to place as the first runner-up to winner Deshauna Barber of District of Columbia, despite being the favorite to win.

Chelsea Keolani Hardin, a true island girl at heart, is 24 years old and born and raised in Hawaii. She has traveled to more than 12 different countries on 4 continents and even lived in Romania. Besides playing volleyball on the beach, her competitive spirit pushes her to try and fall in love with any activity outdoors. Growing up with three brothers, Chelsea’s outgoing personality loves snowboarding, skateboarding, surfing, hiking, canoe paddling, and diving for shells.

Chelsea is a graduate of Iolani School and California Polytechnic State University in San Luis Obispo, CA, where she received a five year athletic scholarship to play NCAA division 1 volleyball. She majored in both Anthropology and Geography and minored in Ethnic Studies. Chelsea currently works as a team member and speed and agility coach with Hawaii Speed and Quickness, a non-profit that promotes the importance of a healthy and active lifestyle in under privileged communities throughout the state.

Chelsea Hardin was crowned Miss Hawaii USA 2016. Catch up with her as she reveals her top fitness secrets in conversation with Namita Nayyar, President Women Fitness.

Ms. Namita Nayyar: You were crowned Miss Hawaii USA 2016 and were the first runner-up at the Miss USA 2016. Tell us something about this spectacular modeling journey and how it all began?

Ms. Chelsea Hardin: Spectacular is exactly how I would describe this journey. It all started while I was working after moving home from Romania, a woman approached me asking if I would ever consider running for Miss Hawaii USA. I’ve been an athlete all my life and never once considered pageantry or modeling, so I didn’t think much of it. This woman however, must have really saw something in me as she was persistent and eventually talked me into it.

The process was hard as it was my very first pageant, but I’m glad I tired something new and took a leap of faith. Not only have I met so many amazing people during my journey to Miss USA, but I was also able to grow as a young lady. I found new limits as I pushed myself physically, mentally and emotionally, more so than athletics has ever pushed me. Getting so far at the Miss USA 2016 I feel was a testament to the hard work the Miss Hawaii USA organization, my personal trainer, my glam team, my coaches and my family had put into getting me ready. Many people are unaware of how hard it is to prepare for something that is on such a grand scale, but the sacrifices and the hard work was totally worth it.