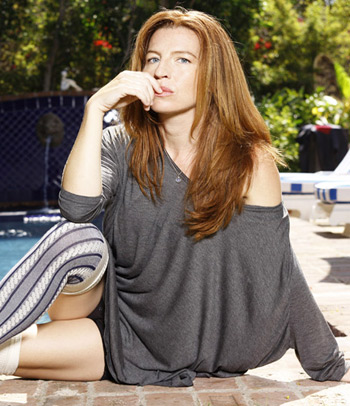 Tanna Marie Frederick is a stage and independent film actress who rose to prominence for her title role in Henry Jaglom’s Hollywood Dreams, for which she received the Best Actress Award at the 2008 Fargo Film Festival.

It’s not surprising that Tanna Frederick — who co-founded the Iowa Independent Film Festival and spearheaded the Iowa filmmaking initiative Project Cornlight — was born and raised in the Hawkeye State. Growing up in Mason City (home of The Music Man’s Meredith Wilson), she performed with the Steben’s Children’s Theatre and starred in high school musicals before continuing her education at the University of Iowa, where she double majored in theatre arts and political science.

After giving the valedictory address at her college graduation, she packed up and moved to Los Angeles, where she continued to work in theatre and small films before meeting indie filmmaker Henry Jaglom. Told by another actor that Jaglom sometimes gave roles to actors who were fans of his work, Frederick wrote him an effusive letter praising his latest film, of which she’d seen approximately twenty minutes. Jaglom responded with an invitation to come to his office and soon a collaborative friendship bloomed. (And yes, she’s now seen all of the film she claimed to adore and he loves the story of their meeting more than anyone)

First Frederick and Jaglom worked together on two plays — a gender reversal of his 1985 film Always… But Not Forever and a production of Richard Nash’s Echoes. Then in 2006, Frederick starred opposite Justin Kirk in Jaglom’s film Hollywood Dreams, for which she won multiple film festival awards for Best Actress. Their other collaborations include the upcoming films The “M” Word with Michael Imperioli and Corey Feldman and Ovation with James Denton as well as Irene in Time (2009), Queen of the Lot (2010) and Just 45 Minutes from Broadway (2012), which began as a long-running play at the Edgemar Theatre in Santa Monica.

Frederick has become a mainstay of the Los Angeles theatre community, starring in successful productions of A.R. Gurney’s Sylvia, Nash’s The Rainmaker — which was a Los Angeles Times Critic’s Pick — and Claire Chafee’s Why Why Have a Body, which also marked Frederick’s directing debut.

Later this year, Frederick’s first film as a producer — Garner, Iowa — will be released. Made through Project Cornlight, the arts initiative she founded to expand the film and performing arts industries in her home state, Frederick stars opposite Tom Bowers and fellow Iowan Joel West in a story about family and redemption. The film was directed by Ron Vignone and written by Richard Schinnow, who co-founded the Iowa Independent Film Festival with Frederick in 2007. While Frederick remains loyal to her fellow Hawkeyes — she recently received the Distinguished Young Alumni Award from her alma mater and spoke at UI’s spring commencement — she is also passionate about her adopted home state of California. A longtime marathon runner with a second degree black belt in Tae Kwon Do, her move West transformed Frederick into an avid surfer. In 2007, she founded the non-profit Project Save Our Surf, which is dedicated to ocean conservation, the improved availability of freshwater to those in need and exposing a wide range of people to the joys of the ocean through surfing. Since 2012, PSOS’s annual Consurfvation Camp has readed 1000 underserved children and teens in Southern California and Mexico, educating them on environmental issues and giving them hands-on instruction in yoga and surfing. Tanna Frederick’s website is located at www.tannafrederick.com.

Tanna Frederick recently wrapped production on Henry Jaglom’s romantic mystery “Ovation” starring opposite James Denton. The story is set in the backstage world of theatre where the cast struggles to keep their play afloat while they search for a murder suspect amongst themselves. She is currently starring in Jaglom’s romantic comedy “The M Word” (with Corey Feldman, Michael Imperioli and Frances Fisher. Jeannette Catsoulis of The New York Times said of her performance, “Ms. Frederick’s gift for juggling farce, fantasy and raw emotion remains impressive.”

Later this year she’ll star as a single mother who returns to Iowa (Frederick’s hometown) to deal with her past in “Garner, Iowa”. She’s also just ended almost a year long performance in “The Rainmaker” at the Edgemar Theatre in Santa Monica. The Los Angeles Times gave it Critics’ Choice and said, “The standout of this terrific cast is Tanna Frederick’s acerbically yearning Lizzie…It’s a transformation not to be missed.” 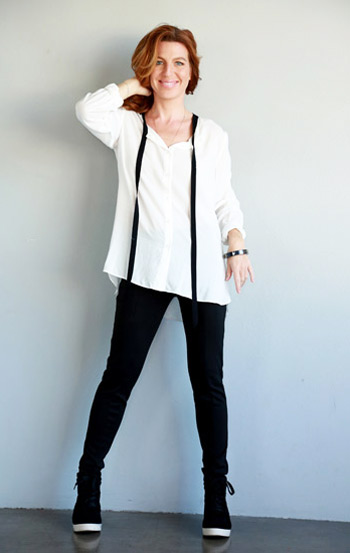 Off-screen, Frederick has proved just as driven and talented. A fitness aficionado who runs daily, Frederick ranked 52nd out of 1,321 women in her division in the LA Marathon. She is a second-degree Tae Kwon Do blackbelt and a passionate surfer. She founded “Project Save Our Surf,” a non-profit that promotes clean oceans and clean water initiatives. She is also founder of the Iowa Film Festival, now in its’ seventh year. She was named the recipient of the University of Iowa’s Distinguished Alumni Award in 2012 and returned there this year to speak at their commencement ceremony.

She is an inspiring actress, surfer, marathoner and philanthropist.

Tanna has consistently followed Hal Higdon’s advanced 2 schedule and can be found running near her home in Santa Monica, Venice and the Palisades. During a marathon in Chicago, she felt overwhelmed when she crossed the finish line. The sense of joy that came from strangers cheering made her feel very accomplished. She thought “Wow, this is more than anyone will ever cheer me at the Oscars.”

She recently ran in the L. A. Marathon, her time was 4:12. Her goal time is sub 4 hours. Recently she also ran the Sunset Strip Half Marathon and her time was 1:46:58 / 8:01 avg pace. She is running for her non-profit Project Save our Surf which promotes clean oceans and water.

Frederick has participated in several marathons including the ASICS, LA Marathon in 2015.