Sweatworking is business networking while taking physical exercise and so working up a sweat. This way of working originated in the USA and started to be promoted in London in 2012, where gyms offered facilities and sessions of this kind. 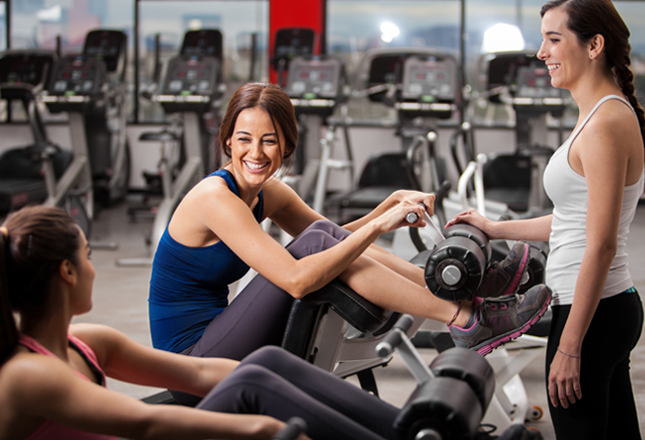 Journalist Lucy Kellaway tried sweatworking with the chairman of Wiggle, Andy Bond, who had experience of similar activity at Asda, playing five-a-side football with Archie Norman. While there was little opportunity to talk during their spinning session at Fitness First, they agreed that the shared experience of suffering was effective in establishing a bond.

New Yorkers have been wooing clients and forging business relationships in yoga classes and locker rooms for more than a minute, but after the New York Times introduced the term “sweatworking” to the public at the end of last year, the concept entered the serious spotlight.

And at the center of it all was Sarah Siciliano, an advertising production executive who has turned sweat-working into a branded business. Siciliano now has a website and a group of clients who work out with her two or more times a week. They spin, stretch, and make business deals.

With the Sweat-working maven for her thoughts on why you should occasionally trade business beers for a boot camp class, if you’re not already a pro:

1. It breaks down barriers. Sure, cocktails can lighten the mood a little, but working hard while sweat drips down your face next to someone is a much more intense bonding experience. At a recent Sweat-working session at SoulCycle, where Siciliano hosts most of her classes, two clients grinned and high-fived each other after a difficult song. Plus, “a lot of the networking happens in the locker room,” says Siciliano. What’s more intimate than sales talk over the shower stall wall?

2. You know the kind of person you’re going to be working with. If someone is willing to meet you for a kick-butt workout at 8 a.m., it’s a good sign that they’re going to be someone you want to do business with, says Siciliano. “They’re accountable,” she explains, and that most likely spills over into their professional manner.

3. Your quality of life is improved. If you’re a sweat-worker, you’re essentially making working out part of your job, which means it will be easier to fit it in, it’s a business expense (and a small one for your boss compared to taking a client to dinner), and you’ll have more energy (instead of a hangover) the next day.

Into the glossary of business buzz phrases – “greed is good”, “lunch is for wimps” and the ubiquitous “thinking outside the box” – have come some lean new contenders. Consider the horrors of a “spin-spin situation” or, worse, “earn while you burn”. The new corporate lingo has been adopted by dealmakers of the future who prefer, literally, to sweat over the details of a contract.

Despite the gym being a place of refuge from work’s strains and stresses, sweating it out in a spinning class (hard pedalling on stationary bikes) or the weights room is increasingly an influential part of the way business is conducted.

The concept of networking while working out – dubbed “sweatworking” in the US where the trend originated – is proving increasingly fashionable in the UK. The New York Times reported last month that business people are taking clients to the gym instead of entertaining them with drinks and meals out. Spinning classes are particular popular because participants can exercise at their own pace. British health clubs, already equipped with cafes and internet access, say they are witnessing a similar trend.

Some informal sweatworking already takes place in inner-city gyms, according to David Petersen, regional manager for Fitness First’s London clubs: customers take business associates along to personal training sessions. One member even conducted a job interview at the gym.

Fitness First will soon launch a structured breakfast networking meeting at one central London club. After making introductions, attendees will do a spinning class before heading to the juice bar for more networking. If successful, the idea could be introduced in the chain’s other gyms.

The rival gym firm LA Fitness says it has already responded to demand from companies for free guest passes by including them in corporate packages, demand for which increased 60 per cent last year.

Peter Harrington, LA Fitness’s sales director, said guest passes mean companies can give clients the option to swap the traditional “boozy lunch” for the gym. While corporate entertaining at gyms was still new, he said, the Olympics could boost its popularity. As people socialise with friends and meet partners at gyms, he said, extending that to professional networks was a natural progression. 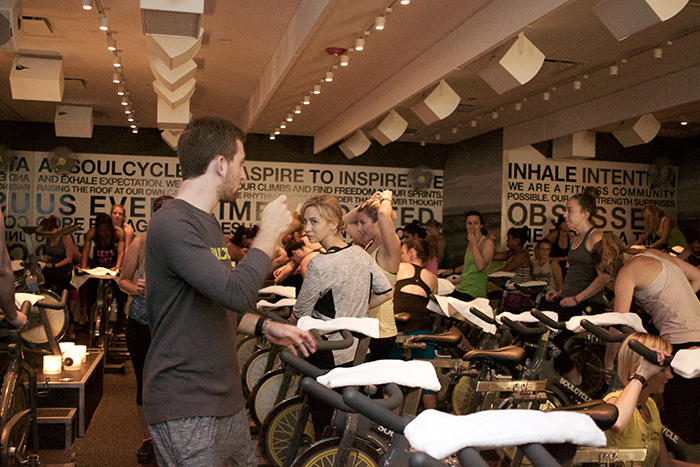 Morgan’s Group is launching Exec Health Club, a business networking forum with gym membership, at centres in Plymouth and Truro in April. Members will meet for monthly seminars. During “learn and burn” classes, they will pick up tips on improving their business while burning calories on an exercise bike.

Michelle Mone, founder of the lingerie brand Ultimo, said that while sweatworking sounded interesting and was a different way of entertaining clients, the gym was a place where a lot of people go to unwind and recharge their batteries.

Working alone gives them the chance to think, she said. “It may not be the best place for a business meeting but a lot of good ideas can come when you’re exercising, so it may be worth trying as a teambuilding challenge with colleagues.”

Client entertainment is a big part of Courtney Tabellione’s job. Fitness is a big part of her personal life. The two frequently have clashed—until recently.
“The eating can get so out of control,” says Ms. Tabellione, who, as a Chicago-based sales director at mobile advertising platform Tapjoy, extends multiple meal and drink invitations every week. So to avoid the extra calories of baked goat cheese and malbec—and the need for even more hours at the gym—she has begun taking clients to punishing, 60-minute circuit-training classes at Lakeview’s Power Sculpt workout studio.

“More senior people accept my invitations to work out because it’s something different,” says Ms. Tabellione, 38. “It also satisfies a personal need. If I’m taking clients out one night anyway, and I can treat them to something special while getting my own workout in, it’s a double win.”

Networking while sweating? It’s called sweatworking, and it’s becoming popular with time-pressed execs who want to build client relationships and visible abs all at once.
Lauren Gibbs, 35, an account director at Publicis Groupe S.A.’s Leo Burnett ad agency, was looking for a new way to bond with an old client while the two were on location producing videos. The pair managed to squeeze in yoga and barre classes in New York, Los Angeles and Calgary, Alberta—and Ms. Gibbs says it took their relationship to a new level.

“You get to see a person do something totally different than what you’re used to seeing them do,” she says. “How they act gives you insight into how to handle a tough work conversation.” Gym owners in town say they’ve been inundated with corporate entertainment requests for more than a year.

Tracy Roemer and Bonnie Micheli, co-owners of Shred415, which hosts a popular interval-training workout at its locations in Lincoln Park and Old Town, say they noticed the trend almost as soon as they opened their first studio in 2011. Sometimes companies rent out entire 25-person classes and bring wine and snacks for afterward. “For some reason it lets you break down barriers you wouldn’t be able to if you were just sitting next to someone at a bar,” Ms. Roemer says. “You sweat and your defense mechanisms come down.”

Executives trace the trend to a combination of restaurant fatigue and extreme multitasking tendencies, augmented by an increasing awareness that being parked at a desk all day constitutes a major health hazard. Marcy Twete, founder of Chicago-based Career Girl Network, is formalizing the sweatworking phenomenon.
On a frigid Thursday last month, 45 women paid $30 to take a 45-minute class at River North spinning studio Flywheel Sports and then grab drinks at the nearby Dana Hotel. The fact that the workout is famously sweaty—and the studio is famously shower-free—wasn’t a deterrent.

“We had a huge, huge response,” Ms. Twete says. “You can’t fake it by arming yourself with the makeup and the hair and the business suit. You have to be who you really are.” (Ms. Tabellione, on the other hand, says there is indeed “a sweat factor” that can complicate post-workout plans, so she takes clients to less-intense yoga classes if they plan to have a glass of wine afterward.)

The Flywheel event proved so popular that Ms. Twete has similar nights lined up in April, August and December, and plans to host monthly sweatworking events in 2014.

Though sweatworkers skew young, female and partial to boutique fitness studios, some mainstream gyms and men are getting into the game. The Loop location of New York-based Equinox recently hosted seven attorneys from law firm McDermott Will & Emery LLP for a private 8 a.m. Pilates class, and Brittany Knott, the gym’s account manager, says Equinox’s corporate event calendar has been filling up steadily over the past year and a half. She’s planning a spinning class for BMO Harris Bank’s mostly male capital markets division in New York—which, if successful, she hopes will spread to Chicago.

But what about potentially awkward scenarios like, say, an out-of-shape client nearly passing out? Many executives say they avoid the situation by extending invitations only to clients they know have a passion for exercise. But Ms. Knott says spinning effectively cloaks fitness-level variances and is perfect for beginners. “You’re on the bike, but no one knows how much resistance you’ve turned up,” she says. “You don’t have to feel like you’re going to die.”