Sweat with Kayla, the passion project behind long time fitness guru Kayla Itsines’ success, is an extension of her brand and reach, created to fill a gap in the market amongst women, and further establish the reach of her exercise empire.

Today Kayla Itsines is supported by a social media following that has given her a platform from where her business has grown and developed into a corporation, more so than the small business ideals she dreamt of out of her homeland of Australia, and Sweat with Kayla app was designed to showcase the variety of women fitness products her brand has to offer.

At its core, the app aims to connect over 10 million women, in an effort to get them healthier, fitter and more confident with varieties of Kayla Itsines certified workouts and recipes.

But to get to the current state of Kayla Itsines, we have to go back to where it all started.

The Sweat with Kayla app, which was the impetus behind Kayla’s success, was constructed to satisfy a need among women, and to assist them in reaching their ideal ‘bikini body’, and this ideology has transcended that initial concept, and subsequently developed into how she is recognized today.

The wildly-successful 12-Week Bikini Guide ebook, is a program built around a basic structure that features a combination of short aerobic exercises and meal plans, over a 12-week period that consists out of 28-minute daily workouts and a clean meal outline, and has garnered her acclaim within the fitness world, and still remains a staple in the modern-day fitness world for many women who still swear by its effectiveness.

In addition to the 28-minute framework, Kayla’s known for recommending exercises that use your own body weight, which means you don’t need to invest in any equipment, you can workout at home, so there’s never an excuse not to work up a sweat.

An article on Bloomberg claims that Kayla Itsines is the Taylor Swift of pushups. And why not? Take the case of Norbati, a 22 year old who flew down from Canada to New York when she heard that Itsines was holding a Sweat with Kayla boot camp styled workout routine for the general public. She wasn’t alone though.

There were groups of women who had travelled from all over the United States to see their idol perform lunges and do the intense burpees on stage. Kayla Itsines has that effect on her fans. On the few rare occasions when she steps out of Australia, she attends events like this that are packed to the brim with women who idolize her.

Many of them have been able to achieve their fitness goals with one of Itsines’ programs. The more popular one being the Bikini Body Guide that has sold millions of copies around the world and is the reason for Kayla’s meteoric rise as the #1 fitness guru on Instagram. But that’s not the only one that people are raving about these days. There’s a new program from Kayla that has just hit town and it is called the Sweat with Kayla App.

The first ever Kayla Itsines app aimed to continue pushing this idea and market wider than it has reached before, and the training companion was aimed to create and support a community of like-minded fitness-oriented individuals who could have easy access to new fitness routines and refreshing meal plans in an affordable, but always accessible, way.

The biggest selling point behind the app, was the introduction of the Bikini Body Guide 3.0 (BBG 3.0), whereas previously you could only access PDF versions of the BBG 1.0 and 2.0, the app promised to bring in new varieties of what fans originally came to love.

After release, the app quickly rose to the top of the charts, and featured many routine workouts that included several features which change slightly depending on what week you are on, as you continue to progress. These features include resistance workouts (legs, arms, abs or full body depending on what week you are on), LISS workouts (Low Intensity Steady State cardio), HIIT workouts (High-intensity interval training), rehabilitation sessions (where you choose to stretch out your upper body, lower body or full body) and sometimes a bonus challenge.

With workout equipment lists, detailed exercise instructions, and even a timer to keep you on task, Itsines great achievement here (that her PDF couldn’t quite address) is that it takes all the guesswork out of your gym time. It’s like having a personal coach to guide you and keep you accountable. It’ll even track how much water you drink each day and give you weekly grocery shopping lists, as well as the ability to take and store progress photos. Do note, however, that the foods featured in the app are the same as the recipes listed in Kayla Itsines HELP guide. 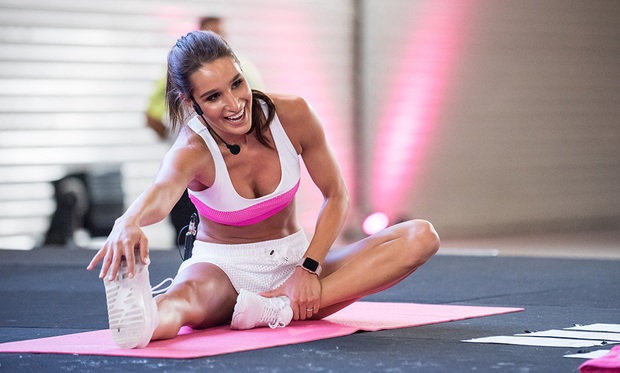 The sleek design, and simple navigation was praised upon release, and the idea to create an online community of support, which is very much needed among women, seemed to inspire many in taking the step to become fitter individuals. For new members, the app could be seen as an affordable option which lets you experience the guides without having to pay the full cost upfront, and Kayla also discussed adding updates and new workouts to the app as time goes by. And unlike the original Bikini Body Guide, the app has no end date, so rather than only being a 12- or 24-week workout program, it offers a lifetime of training, given you pay your monthly subscription.

The harshest criticisms mostly came from long-time fans, voicing dissatisfaction over the price, as owners of the original guides had to pay to access the application (i.e information they already owned), beyond the initial free 7-day trial.

And while the download is free, you can’t see much without punching in your credit card info and committing to the subscription, which runs for $19.99 a month. This boils down to payments of $19.99, which will be debited from your bank account every month until you cancel it. And there is a minimum subscription of 12 weeks, so, in theory, you can sign up for the 7 day free trial but 3 months’ worth of money ($59.97) will be debited from your account, although it will be returned if you cancel the account after your free trial. Just be aware of that if you are low on funds.

Other Sweat with Kayla reviews that leaned towards the negative side, highlighted the many technical difficulties experienced during initial use of the app, and the fact that nothing new was introduced along with the launch, as the application only seemed to replicate the information loaded into the original print versions of the Bikini Body Guide, and reproduced each workout in order.

How Can Sweat With Kayla Help You?

The Sweat with Kayla app has undergone a few updates since it was first launched a year ago. The newer version boasts of a swanky new user interface, a completely revamped menu and a few amazing additions that give you hands-on access to your workout routines in the most simplified manner. When you start the app, you have an icon called ‘Today’. This is your workouts for the day arranged and organized. And you can see the entire workout for the week. So, on Monday itself, you get an idea of the number of LISS or HIIT sessions that you are supposed to do that week. Each workout module gets its own attractive icon that makes it impossible to miss. This section also features a workout planner than can be set up to send out email reminders to you about any workout routines that you may have missed. No more skimping on your workouts with the app.

It motivates you to perform the exercises

If you click on any workout and select your resistance level, it will give you an outline of the four moves that you need to do in the circuit that you have chosen. You can even watch a guide that explains how to perform each move in the correct form. Now, when you are ready and you press start, the Kayla Itsines app starts a countdown from three and then you are entered into a timed circuit. You no longer need to rely on an external timer device. Once the pre-set time for the workout is completed, it sounds a horn-like alarm. Pretty neat feature that’s interactive. There’s a feature in the app called ‘Encourage others’. Once you complete a workout you can send out a motivational message that will be featured on the Sweat with Kayla app all around the world. So, right in the middle of a workout, you might get a motivational pop up message from someone who’s also working out at the same time in a different country and time zone.

It shows you how to eat right

The Kayla Itsines app has a dedicated food section that gives you an advance meal planner that will allow you to plan your meals for the next two weeks and then provide you with a list of the ingredients you need to make those meals and as if those weren’t enough, the app also shows you how to prepare those meals. This is meal planning at its best. Most people try to cut corners with their diet while exercising. The Kayla Itsines app gives you no reasons to skip your diet plan.

By combining these three factors, nothing stops you from getting that bikini body. The app is pretty much everything you need from a personal trainer in a gym. The only difference is that you get to work out from the comfort of your home, at your own convenience and still obtain the ribbed and athletic body that the BBG community is famous for.

Subscription services are often subject to criticism, and several retail companies have come under fire for recurring charges, that said, there are still scores of positive reviews for the app among Itsines’ plenty of loyal fans. And in the face of adversity, she took the negative feedback with the utmost grace and appreciation.

Quickly responding that she listens to each and every one of her fans’ opinions, and will continue to strive towards creating the perfect fitness experience for her fans. And today, the Bikini Body Guide, and Sweat with Kayla app is garnering more and more attention as her profile continues to grow, delivering on its promised delivery of visual fitness results, as further proof of its relevance.