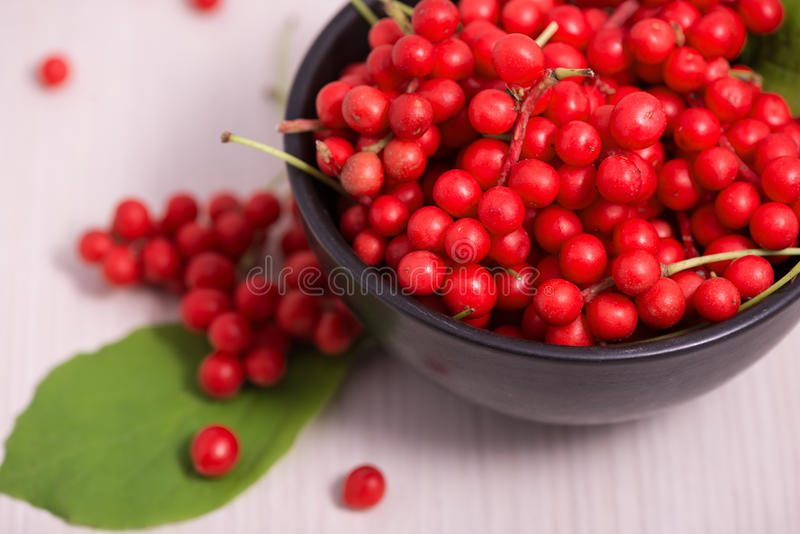 Schisandra is an exceptionally potent multi beneficial herb. Schisandra chinensis means literally “five-flavor berry” which is its common name. It is a deciduous woody vine native to forests of Northern China and the Russian Far East. It is hardy in USDA Zone 4. The plant likes some shade with moist, well-drained soil. The species itself is dioecious, thus flowers on a female plant will only produce fruit when fertilized with pollen from a male plant. However, a hybrid selection titled ‘Eastern Prince’ has perfect flowers and is self-fertile.

Its berries are used in traditional Chinese medicine, where it is considered one of the 50 fundamental herbs. Chemical constituents include the lignans schisandrin, deoxyschisandrin, gomisins, and pregomisin, which are found in the seeds of the fruit. It should not be used by pregnant women.
In China, a wine is made from the berries. In Korean, the berries are known as omija. The cordial drink made from the berries is called omija cha, meaning “omija tea”. In Japanese, they are called gomishi. The Ainu people used this plant, called repnihat, as a remedy for colds and sea-sickness.

In traditional Chinese medicine, S. chinensis is believed to act as an astringent for the Qi of the lungs and kidneys, restrain the essence to treat diarrhea, arrest excessive sweating from deficiency of yin or yang, calm the spirit by refreshing the heart and kidneys, and generate body fluid and reduce thirst.

The great interest in limonnik in Russia arises from results of ethnopharmacological investigations of Russian scientists in the Far East regions where the berries and seeds were used by Nanai (Goldes or Samagir) hunters to improve night vision, as a tonic and to reduce hunger, thirst and exhaustion since “it gives forces to follow a sable all the day without food”. 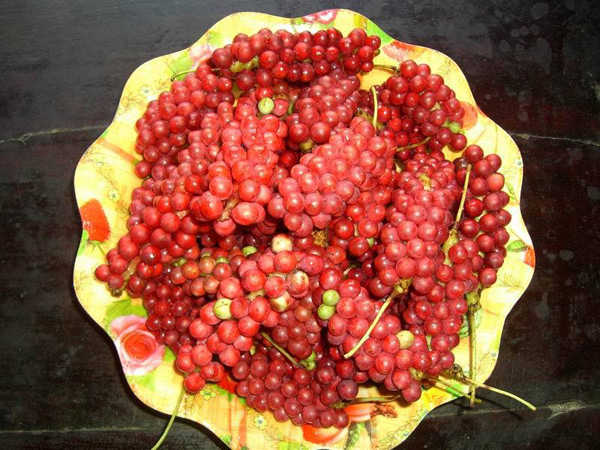 “Pharmacological studies on animals have shown that Schisandra increases physical working capacity and affords a stress-protective effect against a broad spectrum of harmful factors including heat shock, skin burn, cooling, frostbite, immobilization, swimming under load in an atmosphere with decreased air pressure, aseptic inflammation, irradiation, and heavy metal intoxication. The phytoadaptogen exerts an effect on the central nervous, sympathetic, endocrine, immune, respiratory, cardiovascular, gastrointestinal systems, on the development of experimental atherosclerosis, on blood sugar and acid-base balance, and on uterus myotonic activity.”

Schisandra is one of the many traditional Chinese herbs recommended for coughs and various lung diseases. It has been studied extensively in China and Japan. Schisandra has been used for healing for more than 2,000 years. The Chinese name for the plant, “wu-wei-zu,” means “5 taste fruit” and is associated with sweet, sour, bitter, astringent, and salty flavors. Salty and sour tastes were believed to have effects on the liver and testicles, while the bitter and astringent properties were thought to be good for the heart and lungs and the sweet component for the stomach.
Eating schizandra berry may protect you against cancer. A study published in the October 2009 issue of “International Journal of Molecular Medicine” investigated the anti-cancer effects of two phytochemicals — schisandrin and schisandrin C, both found in schizandra berry — in human leukemia cells. In the study, schisandrin C prevented the growth of cancer cells in a dose-dependent manner, while schisandrin was unable to do the same. These findings led researchers to conclude that schisandrin C may serve as a promising anti-cancer agent.

As a cancer medication, adriamycin stops the growth of cancer cells and keeps them from spreading throughout your body. However, it can cause cardiotoxicity, shown through decreased heart function, abnormal accumulation of fluid in the abdominal cavity and congested liver. A study that appeared in the January-February 2006 edition of “Chang Gung Medical Journal” evaluated the protective effects of schizandra berry on cardiotoxicity in rats.