One thing that never goes out of style from generation to generation and that is keeping fit. Getting jumped started to exercise can seem like a grueling task, that is until you get in the groove and rhythm. Let’s go back in time and take a closer look at how women and exercise has evolved over the last 100 years.

1900  1910: The Gibson Girl was originally the artwork of illustrator Charles Dana Gibson which ultimately led to the feminine ideal of fashion and beauty. It was a combination of slight build and voluptuous rolled up into one. The tall slender build was accompanied by a large bust and full hips. The waist was cinched by a corset to exaggerate ample hips for an “S” curve torso. Facial features and neck were slender with a fashionable upsweep bouffant hairdo. She emerged as a new woman who was confident and independent. Athletic in shape, a Gibson Girl couldn’t often be seen cycling around town. The most popular form of exercise during this period was a series of stretches.

1920s: The Roaring Twenties brought in the more liberal woman of that generation, tossing the corsets for a more casual carefree look called the Flapper. The movement represented the teen and younger woman who disregard the former rigid behavior that was deemed appropriate.  Considered scantily dressed at that time, girls showed more skin in the loose fitting dresses and skirts revealing lots of leg dancing to jazz. The woman’s look leaned towards a more boyish look with very short hair, binding bras for smaller breasts and stick straight in stature. The slenderer look popularized dieting and exercise in woman. Stretching continued as one of the most popular forms of fitness.

1930s – 1940’s:  It was the Great Depression that had a large impact on fashion and body image. Shoulder pads were the “in” thing emphasizing bolder shoulders and showing the natural waistline. Halters, backless gowns, sleeveless dresses and below the knee hemlines were the rage. The female figure brought back more emphasis on femininity once again. Mary Bagot Stack started the Women’s League of Health & Beauty in 1930. Her vision was to revitalize energy on a daily basis in health training classes. Her training incorporated movement in exercise that reached everyone including middle and lower class women.

1950’s: The fuller figure was the perfect body image during the postwar era. Curvaceous stars like Marilyn Monroe paved the way for a new kind of sexy that was voluptuous and well endowed.  Beauty products sky-rocketed and were a huge part of women’s fashion with a philosophy that said “don’t leave home without look your best”.  Berets, hats, gloves, brooches and handbags were emphasized as the must have accessories. The Hula Hoop was a fun, popular way to keep the waist trim and stay in shape with over 100,000,000 sold within a two-year period.

1960’s: A woman’s body went through a completely different transition with a mentality of “thin is in” and fuller figure is out. It was reminiscent of the 1920’sbut with a slightly slenderer appearance like supermodel Twiggy represented. It was the Age of Aquarius with and a hippie rebellion. Bellbottom pants, hip huggers, floppy hats, midriff tops and going braless were hip. With top 40’s hits like the Twist and the dance craze along with it, came a new way to exercise with Trim Twist. Compact, it went everywhere you went and with a motion and movement that worked a toner torso.

1970’s: Farrah Fawcett was the hot poster girl who many females aspired to look like. The Farrah Fawcett and Dorothy Hamill Olympic wedge haircuts were the look.  It was during this period when Anorexia was recognized as women suffered from self-inflicted starvation caused by a distorted body image of being fat. Diet pills, crash diets and fad diets were on the rise for the fight to stay thin. Jazzercize erupted an was the way to supreme fitness for women through dance. The workout incorporates jazz dance with cardio and resistance training.

1980’s: “Let’s Get Physical” movement arrives as depicted in Olivia Newton John’s video. Shimmery leotards, matching tights, leg warmers and sweatbands were an absolute must for working out. It set a fashion trend that extended to street wear that also included big hair, the bigger the better. Fashion was geared towards being in shape with spandex, short skirts and leggings. Aerobics was a big part of the workout routine focusing on building muscle and tone with store fronts opening up offering classes day and night.

1990’s: Thinness still reigns supreme but bigger bust-lines are an important part of the sex appeal. Baywatch beauty Pamela Anderson was the envy of every girl who strived to reach her body type. Supermodels were still startling thin having an appearance that was “heroin thin” and “waif look”. Tae Bo becomes the hot new workout trend. It combines muscle strengthening that was first intended for boxers and later captured the attention of celebrities like Paula Abdul.

2000s – 2010: Fashion takes on a “everything goes” look with a leniency to dress length ranging from super short to floor length hems. Hairstyles mean less fuss transcending from updos reserved for special occasions to more casual tresses. Straight flat ironed hair, blowouts and beach curls top the list of favorites. While many strive to be super thin there is a trend of voluptuous that suggests that thicker is better. Bigger booties are where it is at with girls going so far as to have butt implants along with bust implants for a fuller sexier body image. It is trend that seems to be pulling away from the unhealthy anorexic look to a healthier body weight. The Zumba workout is the creation of Columbian choreographer Alberto “Beto” Perez. The workout class includes a mixture of dance and aerobic elements and is a popular trend available at health clubs and fitness centers.

One of the most brilliant ideas is to incorporate entertainment with exercise in what is called Exergaming. It motivates the otherwise less than likely group to exercise as well as reels in gamesters engaged in fun while at the same time offering health benefits. Video gaming has been a long time interest and pastime that spans over several decades. Sitting in front a computer or TV monitor for hours at a time playing your favorite video games is a guilty pleasure of mind stimulation but zero physical inspiration. 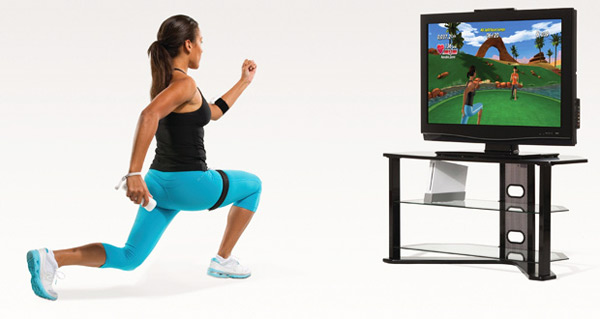 Exergaming promotes an active lifestyle through technology that tracks body movement and reactive impulses. The creative development was inspired to invoke improved fitness with entertainment value that games provide. One of the earliest examples of this was the Atari’s Puffer – an exercise bike connected to an Atari 400/800 or 5200 system. By pedaling it controlled the forward movement and steering the handlebar game pad performed other functions.

By the 1990s high tech virtual reality was incorporated on Life Fitness gym equipment and Nintendo to offer the Entertainment System. The Nintendo released Wii Fit in 2007 whose popularity made its way into hospitals in rehabilitation programs.

Today Exergames are available on mobile devices offering apps that can be played directly on your phone. Slots in Casinos that now have motion vibrating chairs and 3D animation are geared to reach a more youthful market of players. With the advancement of technology, getting your daily workout in while entertaining yourself at a Slot machine is just another future possibility of incorporating fun and fitness. As technology moves forward it continues to open up to new markets to encourage physical fitness.