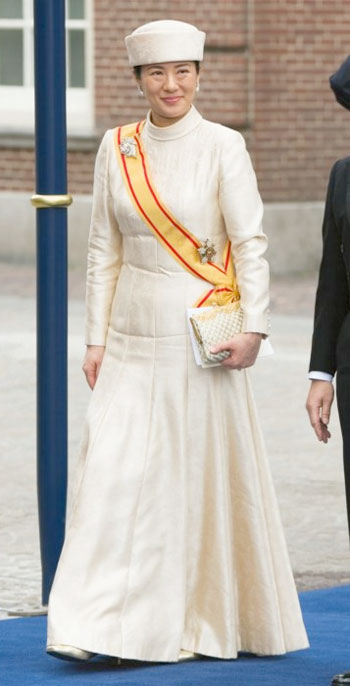 Masako, Crown Princess of Japan , née Masako Owada was born on 9th December 1963. She is the wife of Crown Prince Naruhito, who is the eldest son of Emperor Akihito and Empress Michiko and the heir apparent to the Chrysanthemum Throne. She is a member of the Imperial House of Japan through marriage. If the Crown Prince ascends the throne, Masako will become empress consort.

Masako Owada was born in Tokyo, Japan on 9 December 1963. She is the eldest daughter of Hisashi Owada, a senior diplomat, and former President of the International Court of Justice. She has two younger sisters, twins named Setsuko and Reiko.

Masako went to live in Moscow with her parents when she was two years old, where she completed her kindergarten education. Upon returning to Japan, she attended a private girls’ school in Tokyo, Denenchofu Futaba, from elementary school through her second year of senior high school. Masako and her family moved to the United States, and settled in the Boston, Massachusetts suburb of Belmont, when her father became a guest professor at Harvard University and vice ambassador to the United States. In 1981, she graduated from Belmont High School, where she was president of the National Honor Society. Masako enrolled at Radcliffe College.

In addition to her native Japanese, she is fluent in English and French, and is said to be of conversational standard in German, Russian, and Spanish.

Masako was formerly employed by the Japanese Ministry of Foreign Affairs, where she worked with her father, the Director General and prospective Vice Minister. During her career she met many world leaders, such as U.S. president Bill Clinton and Russian president Boris Yeltsin. She also took part as a translator in negotiations with the United States concerning superconductors.

Masako first met the Crown Prince of Japan when she was a student of the University of Tokyo at a tea for Infanta Elena, Duchess of Lugo in November 1986, although some say they had actually met previously when her father served as an escort to members of the Imperial Family. The prince was immediately captivated by her. They were pursued relentlessly by the press throughout 1987.

Masako’s name disappeared from the list of possible royal brides due to controversy about her maternal grandfather, Yutaka Egashira, Chairman of Chisso, a corporation infamous for the Minamata disease, a major pollution scandal. Behind the scenes, however, her relationship with the prince continued. Masako, like Elizabeth Bowes-Lyon (Queen Elizabeth The Queen Mother), who rejected Prince Albert, Duke of York (George VI)’s marriage proposal because she was “afraid never, never again to be free to think, speak and act as I feel I really ought to.” and ultimately became Empress consort of India just as Masako is expected to become Empress consort of Japan, refused to accept marriage proposals from a prince twice. She refused to accept the Crown Prince of Japan’s marriage proposal because it would force her to give up her promising career in diplomacy to severely restrict her own independence and freedoms. The Prince proposed several times before Masako finally accepted upon his third proposal on 9 December 1992. It was reported that he argued that serving as Crown Princess of Japan would only be “another form of diplomacy” before she finally accepted this third proposal. The Imperial Household Council formally announced the engagement on 19 January 1993 and the engagement ceremony was held on 12 April 1993. Although many were surprised at the news (as it was believed that the prince and Masako had gone their separate ways), the engagement was met with a surge of renewed media attention directed towards the Imperial family and their new princess.

Masako married Crown Prince Naruhito in a traditional wedding ceremony on 9 June 1993. By virtue of the marriage, Masako Owada assumed the formal style Her Imperial Highness The Crown Princess of Japan. In addition, she was placed in the Japanese Imperial Order of Precedence (used for the most formal occasions) behind her mother-in-law, Empress Michiko, and her grandmother-in-law, Empress Dowager Nagako. 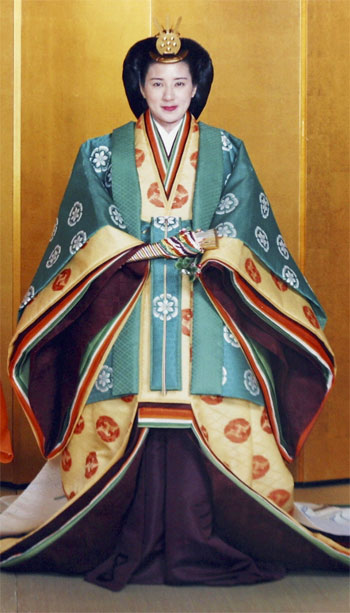 The Crown Princess’s first pregnancy was announced in December 1999, but she miscarried. The Crown Prince and Crown Princess have a daughter: Aiko, Princess Toshi born on 1st December 2001. Their daughter Aiko’s birth, which occurred more than eight years after their marriage, sparked lively debate in Japan about whether the The Imperial Household Law of 1947 should be changed from that of agnatic primogeniture to either cognatic or absolute primogeniture, which would allow a woman to succeed to the Chrysanthemum Throne.

A government-appointed panel of experts submitted a report on 25 October 2005, recommending that the Imperial Succession Law be amended to permit absolute primogeniture. On 20 January 2006, Prime Minister Junichiro Koizumi used part of his annual keynote speech to address the controversy when he pledged to submit a bill to the Diet letting women ascend to the throne in order that the imperial throne be continued into the future in a stable manner. Koizumi did not announce a timing for the legislation to be introduced nor did he provide details about the content but he did note that it would be in line with the conclusions of the 2005 Government Panel.

Plans to change the male-only law of Imperial succession were shelved after it was announced in February 2006 that Masako’s brother-in-law, Prince Akishino, and his wife, Princess Akishino, were expecting their third child. On 6 September 2006, Princess Akishino gave birth to a son, Hisahito, who is third-in-line to the Chrysanthemum Throne under the current law, after his uncle, the Crown Prince and his father, Prince Akishino.

Crown Prince Naruhito attends, together with Crown Princess Masako, events and ceremonies within the Imperial Palace, including ceremonies for the New Year and other events such as the Emperor and Empress’ Garden Parties. On the occasion of visits by State guests from overseas, they attend welcome receptions, Court luncheons and State banquets at the Imperial Palace.

The work of the Crown Prince and Princess includes such official duties at the Crown Prince’s residence as meeting with dignitaries from Japan and overseas, receiving Japanese ambassadors and their spouses before their postings abroad and receiving foreign ambassadors and their spouses before their departure from Japan. They also meet with foreign study groups visiting Japan and representatives of domestic youth groups.

The Crown Princess has also been an Honorary Vice-President of the Japanese Red Cross Society since April 1994.

Princess Masako has remained largely out of the public eye since 2002, reportedly due to emotional disorders which many speculate are caused by the pressure to produce a male heir and adjusting to life in the Imperial Family. In July 2004, she was diagnosed as suffering from adjustment disorder and is reported to be seeking treatment.

On July 11, 2008, Naruhito sought public understanding for his ailing wife. He was on an eight-day trip to Spain without her: “I would like the public to understand that Masako is continuing to make her utmost efforts with the help of those around her. Please continue to watch over her kindly and over the long term.” Pressures to produce a male heir, to conform with the ancient traditions and a 1947 Imperial Law are perceived to be behind her illness, as well as negative media coverage of her behavior, the stress of royal responsibility and public life, and turf battles among the Imperial Household Agency.

In December 2012, at the time of her 49th birthday, the Princess issued a statement thanking the Japanese people for their support and saying that she was still receiving treatment for her illness.

The Japanese Constitution does not allow the members of the Imperial Family to engage in political activities. The Prince made controversial comments about discourtesies and pressures placed on his wife by the Imperial Household Agency and his wife’s desire to pursue the life of a diplomat.