Pregnant women can, and do, develop breast cancer. Prompt diagnosis and therapy are just as important in this population as in the population at large.

Pregnancy brings about many hormone changes in the body. It interrupts the normal menstrual cycle hormone levels for some time. Because of this, women who go through pregnancy while they are young may have a slightly lower risk of breast cancer. Women who have had no children or who had their first pregnancy after age 30 have a slightly higher breast cancer risk.

It is helpful to conceptually divide the management of Breast Cancer during pregnancy into 2 steps:

When a pregnant woman develops breast cancer, it is often diagnosed at a later stage than it is in women who are not pregnant. This is because during pregnancy, hormone changes cause a woman’s breasts to enlarge and become more tender and lumpy. This can make it harder for you or your doctor to find a lump in your breasts. Mammograms are also harder for doctors to read during pregnancy because the breasts become denser. The early changes caused by cancer could also be mistaken for or hidden by the normal changes that happen with pregnancy.

It is relatively safe to have a mammogram during pregnancy. The amount of radiation needed for a mammogram is small. And the radiation is focused on the breast. For extra protection, a lead shield is placed over the abdomen to stop radiation from reaching the womb. Still, scientists can’t be certain about the effects of even a small dose of radiation on an unborn baby. If your doctor does not believe you need to have your mammogram right away, it may be best to wait. Other imaging tests that do not use radiation, such as breast ultrasound, may be used instead. These are thought to be safe alternatives to mammograms during pregnancy. 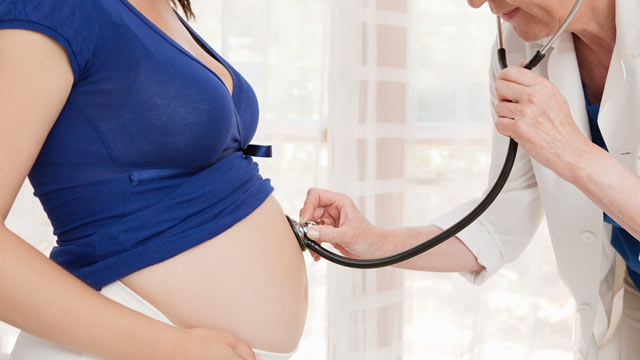 Although a new lump or abnormal imaging test result may cause concern, breast cancer can only be diagnosed by biopsy. During a biopsy a piece of tissue is taken from the area of concern. This is usually done either using a long, hollow needle or through a small surgical incision. A breast biopsy during pregnancy can usually be done on an outpatient basis. Local anesthesia is used to numb just the involved breast area. This causes little risk to the fetus. The biopsy can also be done under general anesthesia (where drugs are used to put the patient into a deep sleep) if needed, with only a very small risk to fetal well-being.

If breast cancer has been diagnosed, other tests may be needed to find out if cancer cells have spread within the breast or to other parts of the body. This process is called staging. Staging tests are very important for pregnant women with breast cancer because their cancers tend to be diagnosed at a more advanced stage. Which staging tests may be needed depends on the situation.

The fetus is not exposed to radiation with certain tests, such as ultrasound and magnetic resonance imaging (MRI) scans. Overall, these tests are thought to be safe and can be used if they are important to your care. But, the contrast material or dye sometimes used in MRI crosses the placenta (the organ that connects the mother to the fetus). It has been linked with fetal abnormalities in lab animals. For this reason, an MRI that uses contrast dye is not recommended during pregnancy.

Chest x-rays, sometimes needed to help make treatment decisions, use a small amount of radiation. They are thought to be safe for pregnant women when the abdomen is shielded.

Other tests, such as bone scans or computed tomography (CT) scans of the chest, abdomen, or pelvis, are more likely to expose the fetus to radiation. These tests are not often needed, especially if the cancer is thought to be just in the breast. In rare cases when these scans are needed, doctors can adjust the way the test is done to limit the fetus’s exposure to radiation as much as possible.

If breast cancer is found during pregnancy, the type and timing of treatment depends on many things, such as the size of the tumor, where the tumor is, how far along the pregnancy is, and what the patient prefers. Treating a pregnant woman with breast cancer has the same goals as treating a non-pregnant woman: control the local disease and keep the cancer from spreading. 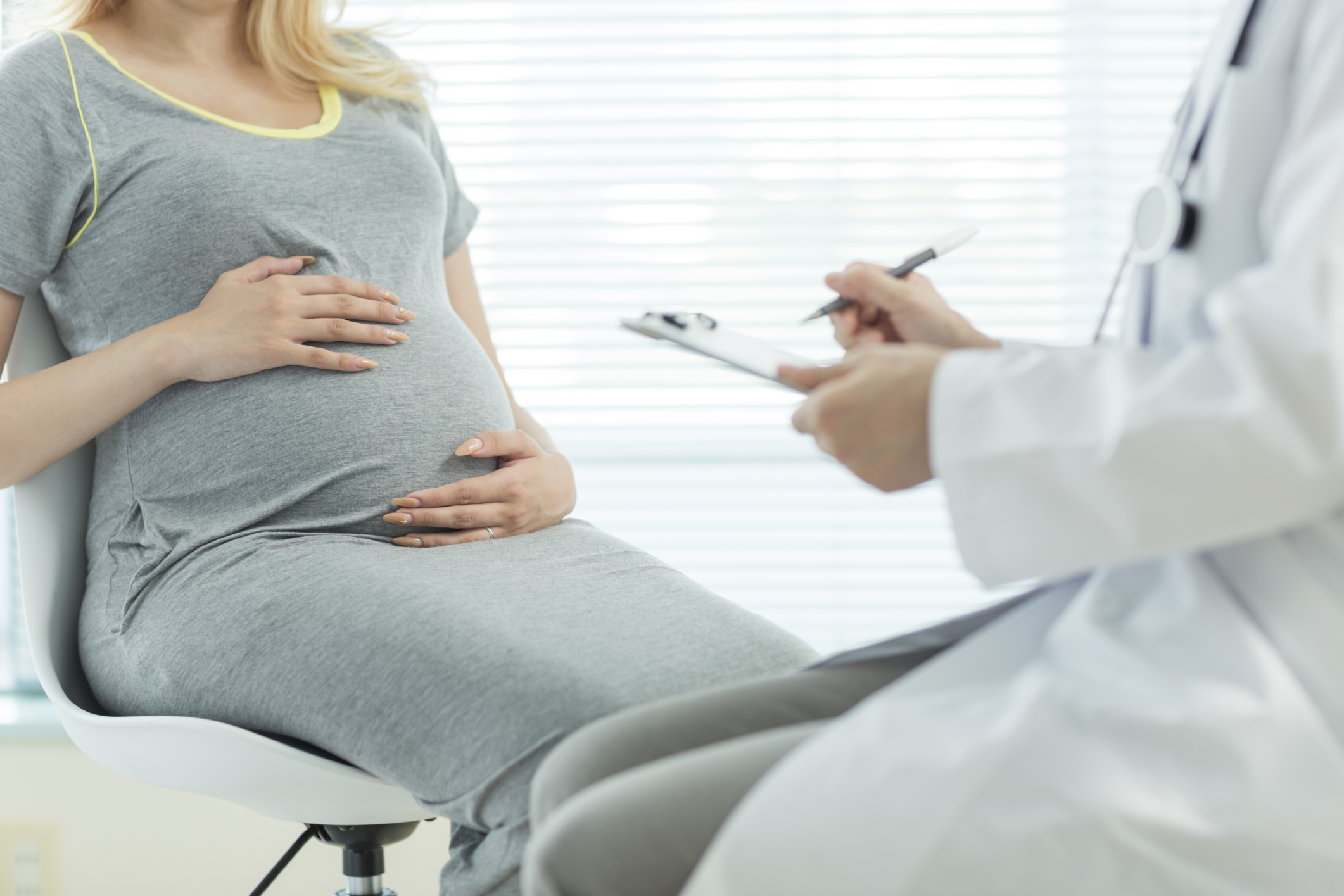 If the cancer is still in the early stages (Stage I or II), the doctor will most likely recommend that you have surgery to remove either the suspicious lump (lumpectomy) or the affected breast (mastectomy). During the operation, the surgeon will examine the lymph nodes to see whether any are affected and will (usually) remove the lymph nodes where the cancer is most likely to have spread. If it is necessary to give chemotherapy, your doctor will usually wait until after the first trimester to reduce the chances that it will harm the baby.

If the cancer is more advanced (Stage III or IV), the situation can become very complicated. If radiation is needed to treat the cancer, it can be very hard to protect the baby. Additionally, these cancers usually require both surgery and chemotherapy, so the risk of harming the baby is much higher. There have been instances where the cancer is advanced to the point where any treatment is not likely to add more than a year or two to the woman’s life. In these cases, whether or not to undergo the treatment and risk harming the baby can be an agonizing decision for both the woman and her family.

It is easier to treat a woman who is not pregnant because there is no fear of harming the fetus. But no studies have proven that ending a pregnancy in order to have cancer treatment improves the woman’s prognosis (outlook for survival).

When possible, surgery is the first line of treatment for any woman with breast cancer, including those who are pregnant. Lumpectomy (removal of the tumor), mastectomy (removal of the entire breast), and/or axillary lymph node removal carry little risk to the fetus. But there are certain times in pregnancy when anesthesia (the drugs used to make you sleep for surgery) may be riskier for the fetus. Many doctors, such as the obstetrician, surgeon, and the anesthesiologist will need to work together to decide the best time during pregnancy to do the surgery. They can also decide which medicines and techniques are the safest for both the mother and the baby.

Mastectomy can often be used as the first treatment for early stage cancers. Women who have breast-saving surgery, like lumpectomy, often need radiation therapy afterward to reduce the chance that the cancer will come back. The need for radiation is an important issue for pregnant women when choosing between surgical options. Radiation could affect the fetus if given during the pregnancy, so it cannot be used until after the birth. Doctors don’t know how this delay may affect a woman’s risk of the cancer coming back (recurrence).

Depending on the stage of the disease, a woman may get more treatment such as chemotherapy, radiation therapy, and/or hormone therapy after surgery (this is called adjuvant treatment) to help lower the risk of the cancer coming back.

Chemotherapy, which is also called chemo, may be used as an additional (adjuvant) treatment after surgery for some earlier stages of breast cancer. It also may be used by itself for more advanced cancers.

Until recently, it was thought that all chemo drugs would harm the fetus. But studies have shown that certain chemo drugs used during the 2nd and 3rd trimesters (the 4th to 9th months of pregnancy) do not raise the risk of birth defects or stillbirths. But we still do not know whether these children have any long-term effects.

When a pregnant woman with early breast cancer needs adjuvant chemo after surgery it is usually delayed until at least the 2nd trimester. For a woman already in her 3rd trimester when the cancer is found, adjuvant chemo may be delayed until after birth. The birth may be induced (brought on) a few weeks early in these cases. Depending on the extent of the cancer, these same treatment plans may also be used for women whose disease is more advanced.

Chemo should not be given 3 to 4 weeks before delivery. This is because one side effect of chemo is that it lowers the mother’s blood counts. This could cause bleeding and increase the chances of infection during birth. Holding off on chemo for the last few weeks before delivery allows the mother’s blood counts to return to normal levels before childbirth.

Radiation therapy to the breast is often used after breast-conserving surgeries (lumpectomy or partial mastectomy) to reduce the risk of the cancer coming back. The high doses of radiation used in cancer treatment can harm the fetus any time during pregnancy. It may cause miscarriage, birth defects, or slow fetal growth, so doctors do not recommend its use during pregnancy.

Pregnant women who choose lumpectomy or partial mastectomy can usually have surgery during the pregnancy and wait until after the baby is born to have radiation therapy. But this treatment approach has not been well-studied in pregnant women. And it is not known if the changes that take place in the breasts during pregnancy and the time delay might effect how well the radiation works.

Hormone therapy, such as treatment with tamoxifen, may be used as adjuvant treatment after surgery or as treatment for advanced cancer. Its use in pregnant women has not been well-studied, so its effects are not known. Most infants born to women taking tamoxifen are normal. But there have been reports of head and face birth defects in a few babies born to women who became pregnant while taking tamoxifen. More study in this area is needed.

At this time it is recommended that hormone therapy for breast cancer treatment should not be started until after the woman has given birth.