The Pepino melon has a light-yellow to light-green skin, streaked with purple variegations. The flesh, when ripe is golden yellow with a narrow seed cavity. The Pepino melon is entirely edible: skin, flesh, pulp and seeds. The yellow interior is fine-grained and sweetly aromatic, intensifying as it ripens. Its flavor can be described as a mix of banana and pear, with a slightly bitter bite. Its size is inconsistent and can be as small as a plum or as large as a papaya. The skin of the Pepino melon is edible but if tough and unpalatable it can easily be peeled away. Ripen at room temperature. Pair with lemons or limes, sweet basil, honey, chiles, chayote and coconut. Serve in fresh salads and sauces. Store ripe Pepino melons in a plastic bag in the refrigerator up to three days.

Solanum muricatum is a species of evergreen shrub native to South America and grown for its sweet edible fruit. It is known as pepino dulce (“sweet pepino” in English, in order to differentiate it from cucumber which is also called “pepino” in Spanish) or simply pepino; the latter is also used for similar species such as “S. mucronatum” (which actually seems to belong in the related genus Lycianthes).

The pepino dulce fruit resembles a melon (Cucumis melo) in color, and its flavor recalls a succulent mixture of honeydew and cucumber, and thus it is also sometimes called pepino melon or melon pear, but pepinos are only very distantly related to melons and pears. Another common name, “tree melon”, is more often used for the Papaya (Carica papaya) though the pepino dulce plant generally does not look much like a tree. The present species is, however, a close relative of other nightshades cultivated for their fruit, including the tomato (S. lycopersicum) and the eggplant (S. melongena), which its own fruit closely resembles.

The fruit is common in markets in Colombia, Ecuador, Bolivia, Peru and Chile, but less often overseas because it is quite sensitive to handling and does not travel well. Attempts to produce commercial cultivars and to export the fruit have been made in New Zealand, Turkey, Mauritius and Chile.

The pepino dulce is presumed to be native to the temperate Andean regions of Colombia, Peru and Chile, though it is not known in the wild and the details of its domestication are unknown. The pepino is a domesticated native of the Andes.

Pepinos are not often found archaeologically as they are soft and pulpy and not easy to preserve, while their tough seeds are small and easily lost among debris. But they were already described by early Spanish chroniclers as being cultivated on the coast; the Moche Valley in Peru was particularly famous for them. They were a popular decorative motif in Moche art.

In the United States the fruit is known to have been grown in San Diego before 1889 and in Santa Barbara by 1897. More commercially viable cultivars were introduced from New Zealand and elsewhere towards the end of the 20th century, leading to its introduction into up-scale markets in Japan, Europe and North America.

The pepino dulce is relatively hardy. In its native range it grows at altitudes ranging from close to sea level up to 3,000 m (10,000 ft.). However, it performs best in a warm, relatively frost-free climate. The plant can survive a low temperature of -2.5°C (27 to 28°F) if the freeze is not prolonged, though it may drop many of its leaves. The species is a perennial, but its sensitivity to chilling, pests, and diseases force the growers to replant the crop every year. The crop also adapts well to greenhouse cultivation, training the plants up to 2 m tall, and obtaining yields that are 2-3 times larger than those obtained outdoors.

They are propagated by cuttings since they are established easily without rooting hormones. It is grown in a manner similar to its relatives such as the tomato, though it grows naturally upright by habit and can thus be cultivated as a free-standing bush, though it is sometimes pruned on trellises. Additionally, supports are sometimes used to keep the weight of the fruit from pulling the plant down. It has a fast growth rate and bears fruit within 4 to 6 months after planting. It is a perennial, but is usually cultivated as an annual. Seedlings are intolerant of weeds, but it can later easily compete with low growing weeds. 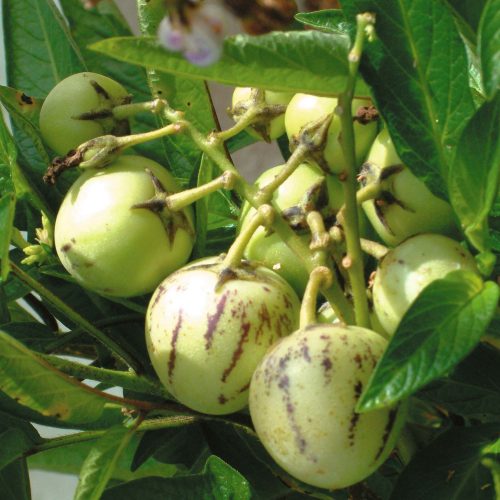 Like their relatives tomatoes, eggplants, tomatillos and tamarillos, pepinos are extremely attractive to beetles, aphids, white flies and spider mites. Pepinos are tolerant of most soil types, but require constant moisture for good fruit production. Established bushes show some tolerance to drought stress, but this typically affects yield. The plants are parthenocarpic, meaning it needs no pollination to set fruit, though pollination will encourage fruiting.

The plant is grown primarily in Chile, New Zealand and Western Australia. In Chile, more than 400 hectares are planted in the Longotoma Valley with an increasing proportion of the harvest being exported. Colombia, Peru, and Ecuador also grow the plant, but on a more local scale. Outside of the Andean region, it been grown in various countries of Central America, Morocco, Spain, Israel, and the highlands of Kenya. In the United States several hundred hectares of the fruit are grown on a small scale in Hawaii and California. More commercially viable cultivars have been introduced from New Zealand and elsewhere in more recent times. As a result, the fruit has been introduced into up-scale markets in Japan, Europe and North America and it is slowly becoming less obscure outside of South America. Delicate and mild-flavored, pepinos are often eaten as a fresh snack fruit, though they combine very well with a number of other fruits as well.

The study of the molecular variation of this pepino is of interest for several reasons. Although the seeds of pepino plants are fertile and produce vigorous offspring, this crop is primarily propagated by cuttings (Heiser, 1964; Anderson, 1979; Morley-Bunker, 1983), and as a consequence, its genetic structure could be different from that of seed-propagated crops.

It helps with liver disease, lowers blood pressure, helps those that suffer from strokes to heal faster, and promotes cardiovascular health.

Pepino Melon can also help prevent cancer and diabetes (tends to regulate blood sugar levels because of the high fiber content), plus lower cholesterol. Plus Pepino Melon is anti-inflammatory in action helping to sooth away your aches and pains.

Pepino Melon has lots of Vitamin A, C, K and also B Vitamins, protein, plus iron and copper, which are essential for a healthy immune system, and calcium for bones, potassium which is needed for relaxing and lowering blood pressure, and Pepino is a good diuretic. 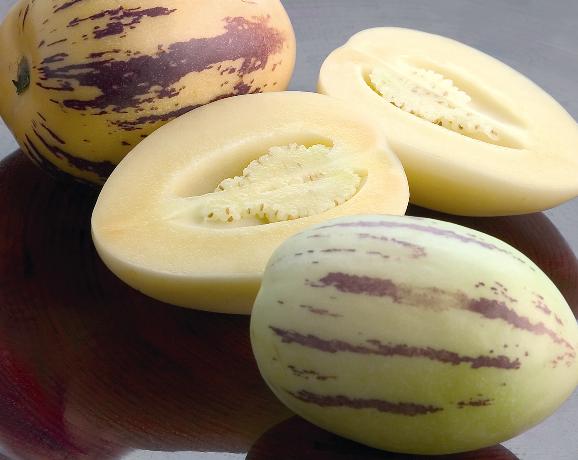 And Pepino Melon has soluble fiber similar to oatmeal, which also helps to lower cholesterol, and its easy to digest. Plus the fiber also helps with constipation and it tends to sooth away gastric ulcers too!

Pepino Melon grows all over the world now and is very popular in Latin American and in Asia.

Pepino melons contains low amount of calories. Hence it helps in lossing weight.All the calories in the pepino melon come from its carbohydrate content. The carbohydrates in the pepino melon are broken down into glucose during digestion, and they are used as your bodys preferred source of fuel.
Pepino melons are an excellent source of fiber. Fiber is a type of carbohydrate your body does not digest.The fiber in the melon slows digestion, helping you feel longer. It also adds bulk to your stool and softens it, makes it easier for you to have a bowel movement. Consuming more fiber lowers your risk of both heart disease and diabetes.

The pepino melon is also sodium-free. Decreasing your daily intake of sodium lowers your blood pressure and reduces your risk of developing illnesses related to high blood pressure, such as heart disease and kidney disease.