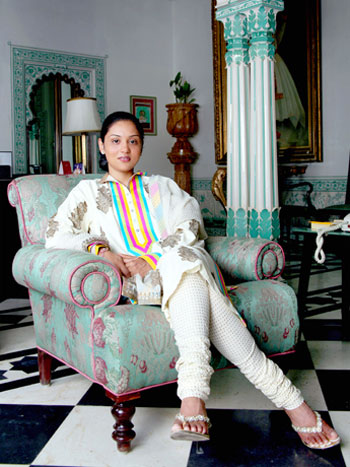 Padmaja Kumari Mewar is a paradox. She is strongly traditional and, at the same time, boldly progressive. Her concern is the past, which keeps her endlessly focused on the future. She’s both of the Eastern and Western world — and yet she is typical of neither. Her heritage defines her, but in her family she is like no one who has come before her.

Ms. Mewar is more than just one paradox — she is many. And yet, in her life and in her business running India’s HRH Hotels, all of these strands come together seamlessly.

Born into a family of Indian royalty that traces its lineage back 77 generations, Ms. Mewar is the latest in her family line to serve the Udaipur region in northwest India. Founded by Maharashi Harit Rashi in 734 AD, the State of Mewar, unlike other regions at the time, based its rule on the idea of “custodianship” — the simple belief that the dewan (prime minister) of the region should act not as king but instead should act as an administrator for the state.

In the 1,500 years since, custodianship has remained central to the family’s mission and duty; thus, it is Ms. Mewar’s charge today. An heir to the family legacy, but no longer a dewan in a traditional sense, Ms. Mewar is the Managing Director of Eternal Mewar — a conglomerate that works to serve and preserve the region in a variety of ways, from education services to hotels and tourism to historical preservation to public health initiatives.

This transition has taken place mostly within the last 60 years. In the middle of the last century, with the affairs of the state changing, the Mewar family began acting not only as custodians to their kingdom but also purveyors of its traditions.

During the 1950s and 60s, Ms. Mewar’s grandfather, Mahrana Bhagwat Singhji, re-imagined the family’s mission — extending the call for custodianship beyond the surrounding region to the world at large. Foreign dignitaries on official visits to the state were given lodge at the family palaces and educational and preservation foundations were established in the region.

Later, Ms. Mewar’s father, Shriji Arvind Singh Mewar, extended these programs to include improved local health care and support for regional arts and crafts. These moves, each with an eye on the future, preserved both the region and the family.

Yet, it was another of her father’s decisions — the one that sent his daughter thousands of miles away from home to study in the United States — that may very well have been his boldest.

Padmaja Kumari Newar went to Northfield Mount Hermon, a private boarding school in western Massachusetts, when she was only 16. It was her father’s idea.

Studying at a college in America was a necessity, her father thought, and Ms. Mewar would only be better prepared by coming for high school as well. In the summer of 1997, her first in America, he enrolled her in the Exploration Senior Program. The transition, Ms. Mewar recalls, both at Explo and in high school, was difficult — culturally, of course, but also scholastically.

“In the States, it’s common knowledge that what you read in a book is not always the same as the way it is on the outside,” she says. “When going to Exploration, I realized the style of education was completely different. I remember still thinking in terms of right and wrong answers. It truly forces you to think for yourself. You know, the whole idea of not necessarily having the right or wrong answer, I think, is one of the things that I picked up in America and I realized it is just much more closely aligned to the real world.”

After high school, Ms. Mewar matriculated to Tulane University in New Orleans, where she studied international relations and minored in business. Upon graduation, she moved to New York City and took a job at the Four Seasons. Over the course of two years she worked her way from the front desk clerk to special service liaison for the hotel’s most important clients.

Having grown up in a family where custodianship is key and then having worked in the hotel industry in the US, Ms. Mewar developed a unique understanding of how to serve.

“In India, it’s in our DNA,” Ms. Mewar said in an interview with the New York Times. “We learn it in our nuclear families from the earliest age. On the other hand, Westerners deliver a kind of seamless service that I admire. You don’t see the waiter refilling your glass but it gets done.”

After her time at the Four Seasons, Ms. Mewar has returned home to join Eternal Mewar, working as Managing Director and traveling extensively to promote the dozen or so palaces and hunting lodges that make up the hotel chain.

In the past year, she’s traveled throughout Europe — to Germany, Russia, Spain, and Italy — as HRH Hotels attempts to diversify and expand into new markets. All the while, the notion of custodianship is never far from her mind or far from the company’s mission. Today, in addition to the hotels, Eternal Mewar runs schools, museums, and galleries, and also funds charities and helps support local businesses.

“We are very serious about our communities and services and the way we go about doing business,” she says. “It really is a living heritage. Every family has family traditions, family heritage, and it custodianship is such a strong part of our identity and heritage. My father’s worked very hard, and it’s only fair for me to think progressively and make sure it doesn’t end here. It’s a great responsibility. We want to go on for another 1,500 years at least.”