Forbes ranks Bettencourt at 9th in its list of the world’s wealthiest persons with an estimated fortune of US$ 33.4 billion. She is the richest woman in the world, and is also the richest person in France. 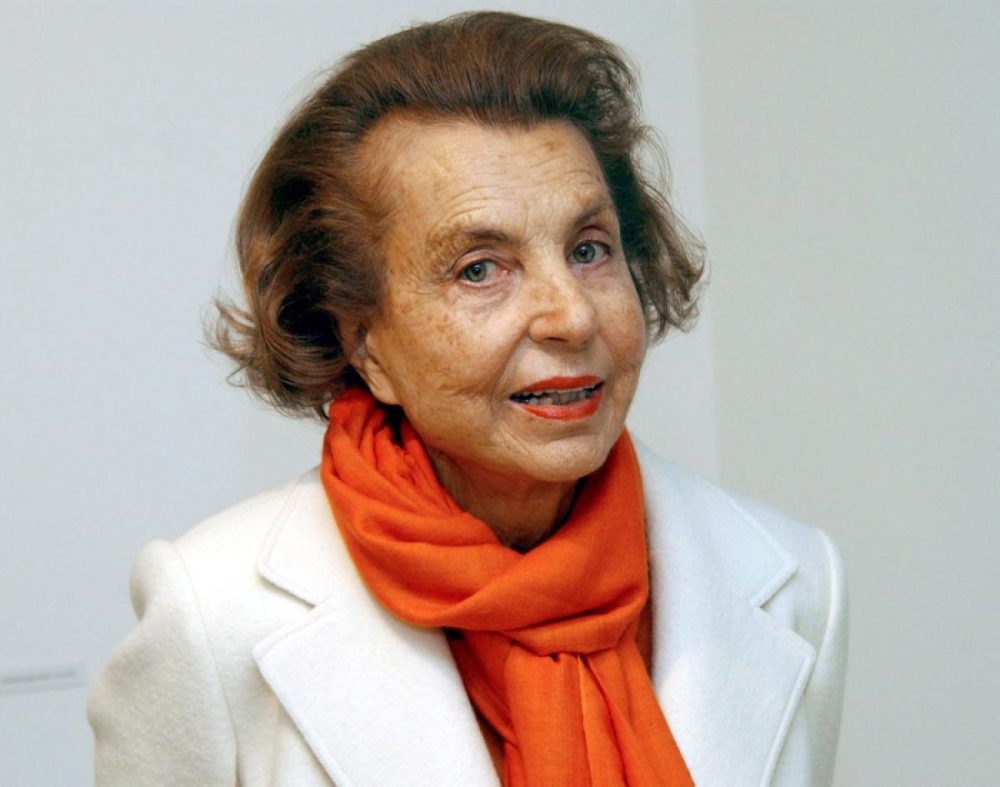 Liliane Henriette Charlotte Schueller, married name Bettencourt was born on 21st October 1922, She is a French heiress, socialite, businesswoman and philanthropist. She is one of the principal shareholders of L’Oréal and as of March 2013, she was listed as the wealthiest woman in the world with an estimated net worth of US $ 33.4 billion.

Bettencourt was born in Paris, France, the only child of Louise Madeleine Berthe (née Doncieux) and Eugène Schueller, the founder of L’Oréal, one of the world’s largest cosmetics and beauty companies. Her mother died in 1927 when Liliane was 5 years old, and she formed a close bond with her father, who later married Liliane’s British governess. At the age of 15 she joined her father’s company as an apprentice, mixing cosmetics and labelling bottles of shampoo.

In 1950 she married French politician André Bettencourt, who served as a cabinet minister in French governments of the 1960s and 1970s and rose to become deputy chairman of L’Oréal. Bettencourt had been a member of La Cagoule, a violent French fascist group that Liliane’s father had funded and supported in the 1930s and that collaborated with the Nazis during World War II. After the war, her husband, like other members of La Cagoule, was given refuge at L’Oréal despite his politically inconvenient past. Eventually the Bettencourts settled in an Art Moderne mansion built in 1951 on rue de Delabordère in Neuilly-sur-Seine, France. They had one daughter, Françoise, who was born on 10 July 1953.

In 1957 Bettencourt inherited the L’Oréal fortune when her father died, becoming the principal shareholder of L’Oréal. In 1963 the company went public, although Bettencourt continued to own a majority stake. In 1974, in fear that the company would get nationalised after the French elections, she exchanged almost half of her stake for a three percent (3%) stake in Nestlé S.A.

As of 31 December 2012 Bettencourt owned 185,661,879 (30.5%) of the outstanding shares of L’Oréal, of which, 76,441,389 (12.56%) shares are effectively held in trust for her daughter), while the remainder is owned as follows: 178,381,021 (29.78%) shares by Nestlé, 229,933,941 (37.76%) shares are publicly held and the remainder are held as treasury stock or in the company savings plan. The Bettencourt family and Nestle act in concert pursuant to a shareholders’ agreement. Bettencourt ended her Board Director tenure on February 13, 2012 and her grandson, Jean-Victor, was appointed as Board Director. Bettencourt’s daughter and her daughter’s husband (Jean-Pierre Meyers) are also members of the board of directors.

The Foundation, which benefits from assets of 150 million Euros and an annual budget of approx 15 million Euros devotes approximately 55% of its funds to scientific education and research, 33% to humanitarian and social projects and 12% to culture and arts. It sponsors prizes through which funds are disbursed to various recipients. For example, the “Liliane Bettencourt Prize for Life Sciences” is an annual award to a top European biomedical researcher under the age of 45. Winners receive €250,000 to support their work in the field of life science.

Recently the Foundation helped fund the new Monet wing at the Musée Marmottan Monet. Conversely in 2007 Bettencourt was jointly “awarded” a Black Planet Award, an award given for destroying the planet, along with Peter Brabeck-Letmathe for proliferating contaminated baby food, monopolising water resources, and tolerating child labor.

Bettencourt has generally shunned media attention and grants few interviews. Since 2007 she has faced intense media scrutiny and publicity over her relationship with François-Marie Banier, the estrangement with her daughter Françoise and her alleged funding of conservative French politicians, including former French president Nicolas Sarkozy.

In August 2012 she sold her private island, D’Arros Island to a Seychelles-registered conservation business linked to the Swiss Save our Seas Foundation. The island was sold for £60 million. In late 2012 she bought a residence in Hottingen, Zurich for a reported 62 million francs. It is believed for tax saving purposes due to the French Wealth Tax (ISF) & French Exit Tax.

By most accounts Bettencourt met François-Marie Banier, a French writer, artist and celebrity photographer, in 1987 when he was commissioned to photograph her for the French magazine Egoiste. Over the ensuing years, Banier and Bettencourt became friends and she became his chief benefactor, bestowing gifts upon him estimated to be worth as much as €1.3 billion. These gifts include, amongst other things, a life insurance policy worth €253 million in 2003, another life insurance policy worth €262 million in 2006, 11 works of art in 2001 valued at €20 million, including paintings by Picasso, Matisse, Mondrian, Delaunay and Léger, a photograph by surrealist Man Ray, and cash. The life insurance policies were allegedly signed over to Banier after Bettencourt was recovering from two hospital stays in 2003 and 2006. 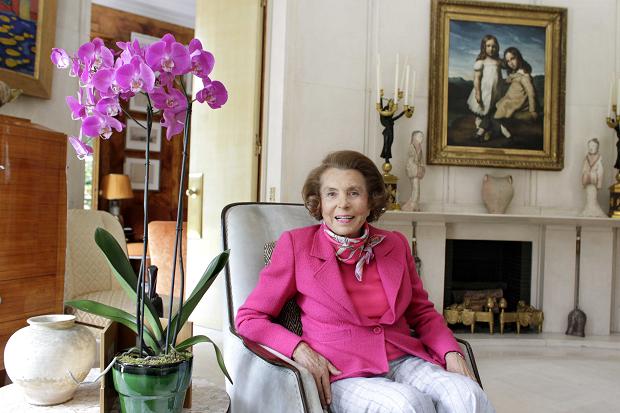 In December 2007, just a month after the death of her father, Françoise Bettencourt Meyers lodged a criminal complaint against Banier, accusing him of abus de faiblesse (or the exploitation of a physical or psychological weakness for personal gain) over Bettencourt. As a result of her complaint, the Brigade Financière, the financial investigative arm of the French national police, opened an investigation and, after interviewing members of Bettencourt’s staff, determined to present the case to a court in Nanterre for trial in September 2009. In December 2009, the court delayed ruling on the case until April 2010 (later extended until July 2010) pending the results of a medical examination of Bettencourt’s mental state. However, Bettencourt refused to submit to these examinations.

In July 2010 the trial was adjourned again until autumn 2010, at the earliest, after details of tape recordings made by Bettencourt’s butler, Pascal Bonnefoy, became public. The tapes allegedly reveal that Bettencourt had made Banier her “sole heir,” excluding the L’Oréal shares which make up the bulk of Bettencourt’s estate and which have already been signed over to her daughter and two grandsons.

On 6 December 2010 Bettencourt reconciled with her daughter, ending a series of lawsuits. It is reported that Bettencourt and Banier had separated, and he was eventually written out of Bettencourt’s will. The spat reignited over the following summer, however, when Bettencourt said her daughter needed to seek psychological help. A re-estrangement resulted.

On 8 June 2011, it was reported daughter Meyers filed an application with the court to make Bettencourt a ward of the state for her health and being incapable of the management of her fortune . On 17 October 2011 a French judge ruled that she is to be placed under the guardianship of members of her family on concerns about Bettencourt’s declining mental health. Francoise Bettencourt-Meyers, along with two grandsons, will now control her wealth and property. Another grandson was named as her personal guardian. Liliane Bettencourt’s lawyer said he would appeal, and told Le Monde newspaper that “Mrs. Bettencourt was ready for ‘nuclear war’ with her daughter.” The court’s ruling will remain in place pending the appeals process.

Bettencourt was reported to be one of the most high-profile victims of Bernard Madoff’s Ponzi scheme, losing € 22 million. She was the first investor in a fund managed by Access International Advisors, which was co-founded by René-Thierry Magon de la Villehuchet. De la Villehuchet committed suicide on 22 December 2008 after it became known that his funds had invested a substantial amount of their capital with Madoff.

In June 2010 during the Bettencourt affair, Bettencourt became embroiled in a high-level French political scandal after other details of the tape recordings made by her butler became public. The tapes allegedly picked up conversations between Bettencourt and her financial adviser, Patrice de Maistre, which indicate that Bettencourt may have avoided paying taxes by keeping a substantial amount of cash in undeclared Swiss bank accounts. The tapes also allegedly captured a conversation between Bettencourt and Éric Woerth, who was soliciting a job for his wife managing Bettencourt’s wealth, while he was acting as budget minister and running a high-profile campaign to catch wealthy tax evaders. Moreover, Bettencourt received a €30 million tax rebate while Woerth was budget minister.

In July 2010 the scandal appeared to widen after Bettencourt’s former accountant, Claire Thibout, alleged in an interview with the French investigative web-site Mediapart, that conservative French politicians were frequently given envelopes stuffed with cash at the Bettencourt’s mansion in Neuilly-sur-Seine. She alleged that Woerth, while acting as treasurer for the Union for a Popular Movement (UMP), was given an envelope containing €150,000 in cash in March 2007 towards the presidential campaign of Nicolas Sarkozy. She also made, then retracted, a claim that Sarkozy was a frequent visitor to the Bettencourt’s home while he was mayor of Neuilly-sur-Seine from 1983 to 2002 and received envelopes containing cash. A few days later, she declared she had been pressured by French police to retract her testimony about Nicolas Sarkozy’s illegal cash. Mr Sarkozy and Mr Woerth both deny wrongdoing. Following these allegations, French police raided the home and office of de Maistre, who heads Clymène, the company owned by Bettencourt to manage her wealth. Political donations are limited to €7,500 for political parties and €4,600 for individuals. Contributions above €150 must be paid by cheque with the donor clearly identified.