Katie Ledecky smashed the world record for the 1500m freestyle to take her second gold medal, after the 800m, at the world championships on Tuesday in Barcelona. Looking stronger at the end of the gruelling race than she did at the beginning, the 16-year-old obliterated the previous record by more than six seconds. 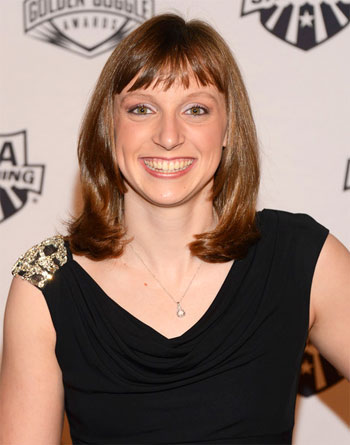 Katie Ledecky said “Female athletes are finding beauty in competing in the moment, but are also finding the beauty in enjoying those moments in a non-stressful manner, having fun with teammates in sharing common experiences and meeting goals, and then using their success to help others. Helping others is beautiful “.

Ledecky was born in Washington, D.C., the daughter of David and Mary Gen Ledecky. David Ledecky’s father came to the United States from the Czechoslovakia in 1947. Her mother swam for the University of New Mexico. Ledecky resides in Bethesda, Maryland, where she attends Stone Ridge School of the Sacred Heart. Ledecky began swimming at the age of six due to influence of her older brother, Michael. Through the summer of 2012, she trained with the Nation’s Capital Swim Club (formerly the Curl Burke Swim Club) under coach Yuri Suguiyama. She continues to train with the Nation’s Capital Swim Club under coach Bruce Gemmell. During the summers, she swims for Palisades Swim Team in Bethesda.

At the 2012 Summer Olympics in London, Ledecky qualified to swim in the final of the 800-meter freestyle by placing third overall in the heats with a time of 8:23.84. In the final, Ledecky shocked the field by winning the gold medal by over four seconds with a time of 8:14.63, the second-fastest effort of all time just behind Rebecca Adlington’s world record of 8:14.10 set in 2008. In addition, she broke Janet Evans’ American record of 8:16.22 that stood since 1989. In the final, Ledecky took it out hard and by the 200-meter mark, she had already established an almost body length lead. At the 400-meter mark, Ledecky split 4:04.34, a personal best for her in that distance, and would have placed fifth in the individual 400-meter freestyle. At the 750-meter mark, Ledecky was 3.42 seconds ahead of Mireia Belmonte García, and 0.31 seconds under world record pace. Ledecky ended up winning by a margin of 4.13 seconds and just missing the world record by 0.53 seconds. Her gold was the first international medal of her career, warranting her the 2012 Best Female Performance of the Year and Breakout Performer of the Year at the Golden Goggle Awards.