Glucagon-like peptide 1 or GLP-1 is a hormone produced in the gut and released in response to food. It causes reduced appetite and the release of insulin. 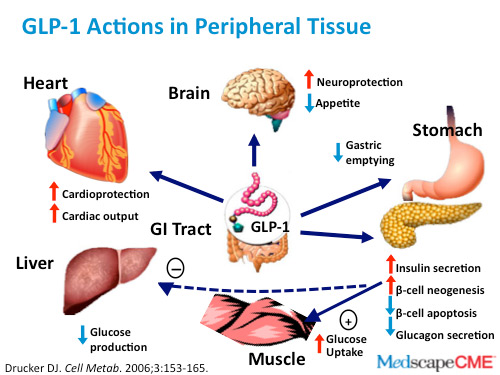 At present, bariatric surgery is the only truly successful treatment of severe obesity. Mimicking one of the effects of bariatric surgery, namely the increased secretion of glucagon-like peptide (GLP)-1, by artificially increasing the levels of GLP-1 might prove successful as obesity treatment. Recent studies have shown that GLP-1 is a physiological regulator of appetite and food intake which assist in weight loss.

What is glucagon-like peptide 1?

Glucagon-like peptide 1 reduces appetite after a meal, in that case, if the body releases less of this hormone, individuals may eat more during a meal and are more likely to snack between meals. Dieting, or natural weight loss, is linked to a decrease in glucagon-like peptide 1. The result may be an increased appetite and tendency to regain weight.

GLP-1–based Type-2 Diabetes (T2D) therapies are now commonly used in combination with other drugs with the added weight-loss effect broadening its therapeutic application in human obesity. Since bariatric surgery causes weight loss and T2D remission with enhanced postprandial GLP-1 secretion, the role of GLP-1 as a mediator of surgery-associated benefits has been investigated.  However, to date, this hypothesis remains inconclusive because mice lacking GLP-1 receptors (GLP-1Rs) responded similarly to controls after vertical sleeve gastrectomy.