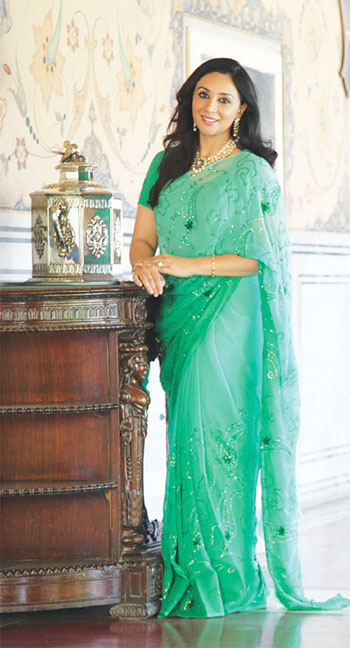 Princess Diya Kumari was born on 30th January 1971, She is often styled as Rajkumari Diya Kumari of Jaipur, is the daughter of Maharaja Sawai Bhawani Singh Ji and Her Highness Maharani Padmini Devi of Jaipur.

Being an only child, Princess Diya Kumari has been personally groomed by her grandmother Rajmata Gayatri Devi. She’s rooted in reality and unspoilt by glamour. She is the custodian of a legacy and doing a job of a princess to keep the art and culture of the royal family of Jaipur alive.

Princess Diya Kumari has three children from her marriage to Maharaj Shri Narendra Singh. Their eldest son Maharaj Kumar Padmanabh Singh was born on 2 July 1998, adopted by His Late Highness Maharaja Sawai Bhawani Singh as his crown prince on 22 November 2002, and enthroned on Jaipur Gaddi on 27 April 2011. Their second son is Rajkumar Laksh Raj Singh and their daughter is Rajkumari Gauravi Kumari.

Following the footsteps of her grandmother Rajmata Gayatri Devi, Princess Diya Kumari has finally taken the plunge into politics. She has formally joined the Bharatiya Janata Party on September 10, 2013 before a crowd of two-lakh in the presence of Gujarat Chief Minister Narendra Modi, BJP president Rajnath Singh and Vasundhara Raje, at a rally in Jaipur.

Princess Diya Kumari being a doting mother of three children from her marriage to Maharaj Narendra Singh, she is actively engaged in the management of the family Hotels, Museums and Schools.

A true educationist at heart, she feels that education plays a vital role in transforming both individual lives and the entire society and thus she took initiative in establishing two highly prestigious educational institutes of Jaipur known as The Palace School and Maharaja Sawai Bhawani Singh School. She takes pride and keen interest in managing them.

She has played a vital role in steering the Maharaja Sawai Man Singh II Museum Trust and the Jaigarh Public Charitable Trust to new heights. With her innovative and dynamic ideas, she has infused new life into both the trusts by changing the museum from a static, staid display arena to a hub of non formal educational and cultural activities. She has also been instrumental in the revival of the 36 Kharkhanas, an old system of art and craftsmanship followed in the erstwhile Jaipur State to its new origin as “Friends of the Museum”. Artisans and craftsmen including many of the national and district award winners are given shelter, patronage and opportunity to demonstrate their art and craftsmanship before visitors and directly sell their products to them.

Inspite of her busy schedule handling the businesses and schools, she ensures to take time out for works of charity and extends all possible help and support to various causes. She also encourages the youth to excel in the field of fine arts, academics, sports etc.