Effect of duration of exercise as well as type of diet on relative percentages of carbohydrate or fat used for energy by muscles. (Based partly on data in Fox: Sports Physiology. Philadelphia, Saunders College Publishing, 1979.)
Below is a comparative example of diet and the speed at which athletes run for the marathon race, their endurance as measured by the time that they can sustain the race until complete exhaustion is approximately the following:

The corresponding amounts of glycogen stored in the muscle are approximately the following:

Though above, we have emphasized the need for a high carbohydrate diet and large stores of muscle glycogen for maximal athletic performance, this does not mean that only carbohydrates are used for muscle energy-it means simply that carbohydrates are by preference. Actually, the muscles often use large amounts of fat for energy in the form of fatty acids and acetoacetic acid and also use to a much less extent proteins in the form of amino acids. 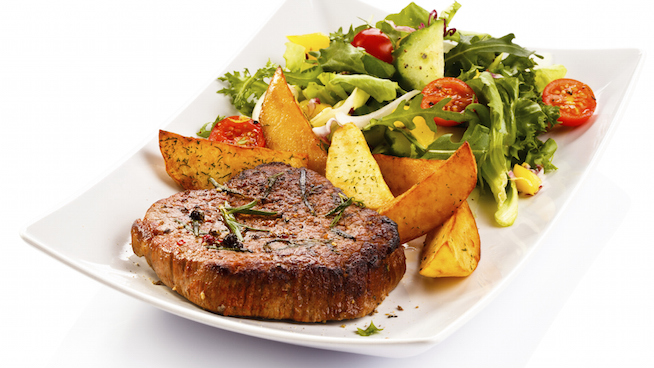 Even under the best conditions, in the endurance athletic events that last longer than 4 to 5 hours the glycogen stores of the muscle become depleted and are then of little further use for energizing muscle contraction. Instead, the muscle now depends upon glucose that can be absorbed from the gut, which is limited, or upon energy from other sources, mainly from fats (as much as 50 to 80 per cent of the energy is being derived from fats rather than carbohydrates at exhaution).

Not all the energy from carbohydrates comes from the stored muscle glycogen. In many persons almost as much glycogen is stored in the liver as in the muscles, and this can be released into the blood in the form of glucose, then taken up by the muscles as an energy source. In addition, glucose solutions given to an athlete to drink during the course of an athletic (in optimal concentrations of 2 to 2.5 per cent) can provide as much as 30 to 40 per cent of the energy required during prolonged events such as marathon races.
In essence, then, muscle glycogen and blood glucose are the energy nutrients of choice for intense muscle activity. Yet, even so, for a real endurance event one can expect fat to supply more than 50 per cent of the required energy after about the first 3 to 4 hours.