Ackee and saltfish is a traditional Jamaican dish, known as Jamaica’s national dish. It spread to other countries with the Jamaican diaspora. The ackee fruit was imported to Jamaica from West Africa (probably on a slave ship) before 1778. It is also known as Blighia sapida. The scientific name honours Captain William Bligh who took the fruit from Jamaica to the Royal Botanic Gardens in Kew, England in 1793 and introduced it to science. Because parts of the fruit are toxic, there are shipping restrictions when being imported to countries such as the United States.

To prepare the dish, salt cod (packet salt fish may need to be boiled down and should be free of ‘pink’ mould) is sautéed with boiled ackee, onions, Scotch Bonnet peppers (optional), tomatoes, and spices, such as black pepper and pimiento. It can be garnished with crisp bacon and fresh tomatoes, and is usually served as breakfast or dinner alongside breadfruit, hard dough bread, dumplings, fried plantain, or boiled green bananas.

Ackee and saltfish can also be eaten with rice and peas or plain white rice. When ackee and salt is combined with plain rice it is often called seasoned rice which is a delicious one pot meal that is usually eaten on Fridays as an inexpensive meal for dinner.

In the United Kingdom, Canada and the United States, “ackee and saltfish” is eaten widely , although canned ackee is more often used than fresh in some foreign countries. However, people from countries where the fruit is indigenous prefer to eat fresh ackee from the pod as opposed to ackee from a tin. Fresh ackee, if prepared improperly, can be dangerous. This dish is usually eaten on Sundays in Jamaica, but it can be eaten on any day of the week.

The unripened or inedible portions of the fruit contain the toxins hypoglycin A and hypoglycin B. Hypoglycin A is found in both the seeds and the arils, while hypoglycin B is found only in the seeds. Hypoglycin is converted in the body to methylenecyclopropyl acetic acid (MCPA). Hypoglycin and MCPA are both toxic. MCPA inhibits several enzymes involved in the breakdown of acyl CoA compounds. Hypoglycin binds irreversibly to coenzyme A, carnitine and carnitine acyltransferases I and II reducing their bioavailability and consequently inhibiting beta oxidation of fatty acids. Beta oxidation normally provides the body with ATP, NADH, and acetyl CoA which is used to supplement the energy produced by glycolysis. Glucose stores are consequently depleted leading to hypoglycemia. Clinically, this condition is called Jamaican vomiting sickness. Ill effects occur only when the immature fruit is consumed.

The islands of the Caribbean account for less than 0.03% of the world’s landmass and are enriched with a wide variety of flora and fauna. More than 2% of the world’s total number of plant and vertebrate species are endemic there . Due to the regions rich diversity of flora and fauna, there is increasing interest in the isolation of natural products which have been found to possess a wide range of interesting biological activities. Hypoglycin A, an unusual amino acid, was initially isolated from the ackee fruit and has been the focus of many years of research due to its ability to significantly reduce blood glucose levels and induce hypoglycemia.

The ackee is a tropical fruit belonging to the Sapindaceae family. It has its origin in West Africa but has traversed the Atlantic Ocean making the Caribbean its home. Its exact date of arrival is unknown but it is believed that the fruit was transported to the Caribbean by slave ships sometime around the 18th century. The trivial name ackee, is derived from the terms “anke” and “akye-fufuo” which are used to describe the fruit in West Africa. The fruit was named Blighia sapida in honor of the infamous Captain William Bligh of Mutiny on the Bounty who transported the fruit from Jamaica to England in 1793 .

Consumption of the ackee is mainly in Jamaica, Haiti and some parts of West Africa. In Jamaica, the fruit serves as a major component of the national dish ackee and codfish. There, the fruit is also processed in brine, canned and exported earning over US $13 million annually. The fruit is divided into three major sections, the pod, the seed and the edible portion, the arilli.

The fruit while beautiful in appearance is not as harmless as it seems. Its intense red color may well allude to the dangers involved in consuming the immature fruit. The ackee has been the cause of widespread epidemics both in Jamaica and in West Africa. From as early as the 19th century there were speculations that the fruit may be toxic. It was not until 1955, however, that the actual causative factor of its toxicity was elucidated.

Between the years 1880 – 1955, there evolved an illness that was found predominantly in Jamaica. The illness was accompanied by severe bouts of vomiting and was named Jamaican Vomiting Sickness (JVS). JVS is also referred to as Toxic Hypoglycemic Syndrome and is associated with severe disturbances in carbohydrate and lipid metabolism. Clinical features of the illness include vomiting, abdominal pain, depletion of hepatic glycogen, hypoglycemia, aciduria, coma and in severe cases death . 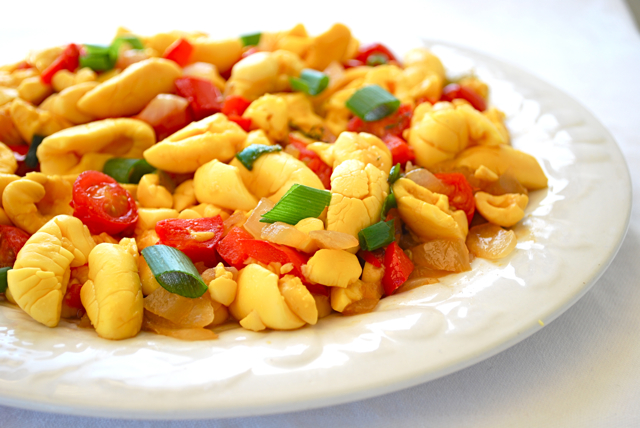 In 1955 the causative factor of JVS was isolated, a non proteinogenic amino acid, hypoglycin A, so named due to its ability to induce severe hypoglycemia. Its chemical structure was elucidated in 1958 and scientifically it is referred to as L-alpha-amino-beta-methylene cyclopropane propionic acid.

Metabolism of Hypoglycin A

Thorough investigation of the toxicity associated with hypoglycin A revealed that the actual causative agent of JVS is a metabolite of hypoglycin A called methylenecyclopropane acetyl CoA (MCPA-CoA). Hypoglycin A is transaminated to methylenecyclopropyl-alanine (MCPA) and subsequently undergoes oxidative decarboxylation to form MCPA-CoA . MCPA-CoA exerts its effect by inhibiting several coenzyme A dehydrogenases which are essential for gluconeogenesis . Depletion of glucose reserves and the inability of cells to regenerate glucose leads to hypoglycemia.

The ackee takes seven to eight weeks to attain full maturity. During weeks two through three of fruit development, the fruit doubles in size after which the fruit increases at a much slower rate . At full maturity the fruits are pear shaped and acquire a red or a yellow tinge with red coloration. The pods then open revealing the seeds and 3 fleshy arilli. Fruits are safe for consumption only at this stage of maturity.

In recent years, there have been reported incidences of toxic hypoglycemic syndrome in Burkina Faso, The Ivory Coast, Togo and Benin. Lethality was 100% in the Burkina Faso epidemic and victims of the illness were all children . Deaths were linked to ackee intoxication due to enhanced concentrations of dicarboxylic acids in the urine of the victims. Suggestions have been made that the ingestion of unripe ackee fruits may be responsible for a substantial number of unexplained deaths in preschool children in West Africa . Children are the most susceptible to the illness and there appears to be ignorance with regards to the toxic nature of the immature fruit. Ongoing educational campaigns are of utmost importance for the total eradication of this deadly syndrome.

Treatment of Hypoglycin A Toxicity

There is no standard method of treating toxic hypoglycemic syndrome. Care has been focused on relieving symptoms and providing supportive care. Early sugar and glucose administration is also recommended. Other treatments to relieve symptoms of the ailment include the use of antiemetics to control vomiting, gastrointestinal decontaminants, dextrose and glucose stimulators and benzodiazepines to control seizures. The administration of riboflavin and glycine have also been reported to antagonize the effects of hypoglycin A intoxication . It is believed that riboflavin stimulates the de novo synthesis of acyl-CoA dehydrogenases while glycine conjugates with excess dicarboxylic acids produced due to impaired lipid metabolism .

Analysis and Quantification of Hypoglycin A

In earlier years, the analysis and quantification of hypoglycin A was difficult and time consuming due to co-elution problems with the amino acids leucine, isoleucine and valine. Ion exchange amino acid analysis was limited by the fact that amino acids with similar solubility and chromatographic properties to hypoglycin A caused problems in resolution. Different analytical techniques have been utilized to solve this problem and include fluorimetry, spectrophotometry and high performance liquid chromatography (HPLC). HPLC is currently the method of choice for hypoglycin A quantification. It presents a rapid, reliable and reproducible means of quantifying the amino acid. Hypoglycin A is first derivatized and subsequently analyzed on a reversed-phase liquid chromatography system. Two derivatizing agents are currently being used, O-phthalaldehyde (OPA) and phenylisothiocyanate (PITC). This method of quantifying hypoglycin A was initially developed in 1989 through collaborative efforts between the Jamaica Bureau of Standard and the University of Florida . The Pico-Tag method which utilizes phenylisothiocyanate as the derivatizing agent was developed by a research group in Canada. Currently, low nanogram quantities of the analyte may be detected.

Other Metabolites in the Ackee Fruit

The plants found in the Caribbean continue to be a rich store house of interesting biological molecules. The ackee serves as one such example and has played an intriguing role in the history of the Caribbean. It has sparked the interest of a number of researchers in Jamaica and internationally. Research on this unusual fruit continues as well as other plants in the region with the hope of finding other biologically active components which may be of therapeutic value in the treatment of various diseases.