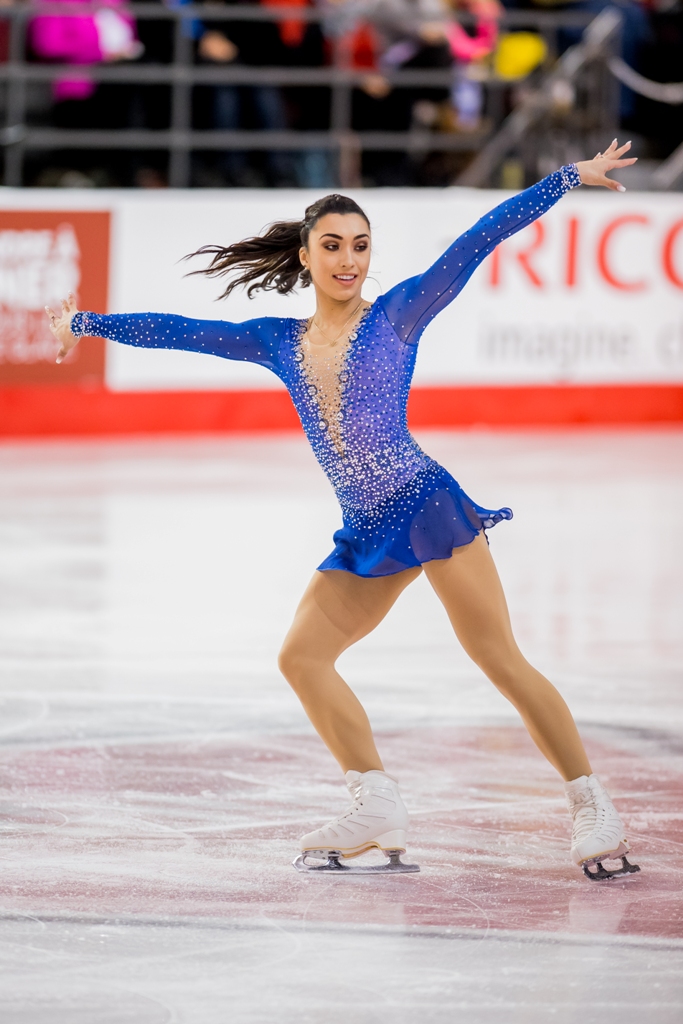 Check out her complete interview with our President, Ms. Namita Nayyar, on Women Fitness.

You began skating at the young age of four and reached the pinnacle of success by becoming the 2017 World bronze medalist, 2017 Four Continents silver medalist, 2014 CS Autumn Classic champion, and 2015 Canadian national champion. Walk us through this spectacular journey and tell us how it all began?

When I was four my parents signed me up for skating lessons because they thought every Canadian child should know how to skate. The ice is a part of who we are as Canadians.  My mom was a huge skating fan who always loved skating. Then while watching Joannie Rochette at the 2006 Torino Olympics on the television, I turned to my mom and said “That’s what I want to do and when I get older I’m going to the Olympics.” I was already in competitive skating and gymnastics at the same time, but had not yet made the commitment to one sport or the other. Shortly after that I made the commitment to skating.

We got a new skating coach, Andrei Berezintsev from France, who was my coach for the next eight years. He taught me all my jumps and spins. My dad is a track coach, so he did my off ice training and nutrition. It took about 9 months before I started to see improvements in my skating, but then I had a good skate in the spring at a competition in Scarborough, Ontario. After that I started to excel, winning silver at Sectionals in the Juvenile Women’s category and was the Ontario Winter Games champion the next year.

My Coach really wanted to push me so we skipped the next level and went to Novice women where I placed sixth in Canada.  I then went to the Junior level in 2012 where I won my first National title.  I competed on the World Junior circuit for the next 2 years, but competed as a Senior nationally (it was a rule that if you win, you had to move up).  In 2013, I shocked Canada by winning the silver medal at Nationals at the age of 15 (a couple of days after my birthday).  Then the following year I won the silver again and was named to the Olympic team the day before my 16th birthday and went on to come 13th at Worlds.  That summer I worked even harder on my skating, fitness and nutrition.  Skate Canada set me up with a nutritionist and started fitness testing to monitor my progress.  In October I won my first international competition, at the Autumn Classic International.  The win gave me a lot of confidence heading into Nationals that year where I won my second championship title.  I then went to the Four Continents Championships that year and placed 7th, but knew I could do better at Worlds.  So I went back home and trained even harder, but had an unfortunate accident and dislocated my knee cap during a training session, five weeks before worlds.  Fortunately I didn’t tear the meniscus, but I was forced to stay off the ice for two weeks and not jump until I went to Worlds.  Skate Canada still sent me to Worlds where I did not fare well at all and had my worst placement ever in my life.  For many reasons this is when I made a tough decision to leave my coach of eight years.

I decided to move to the Cricket Club in Toronto to work with Lee Barkell, Brian Orser and Tracy Wilson.  Lee, Brian and Tracy are great; they keep me focused and I am really back to loving my sport. Every day I come in and I’m greeted with smiles and there is such positive energy at the Cricket. Brian, Lee, Tracy and all the other coaches at the club work together with such passion, joy and energy that it just puts you in a great mindset to work hard.  Even days where I might be having a rough practice on the ice they somehow pick me up and make me feel good about the session and myself. That is another important influence they have had on me; making me feel good about myself.  Before coming to them I was starting to get frustrated with myself, not happy with my skating and feeling down a lot. I have also learned that training well means listening to my body and coaches; not to train through injury and getting rest when I need it. I want to have a long career in this sport, so I need to take care of my body. 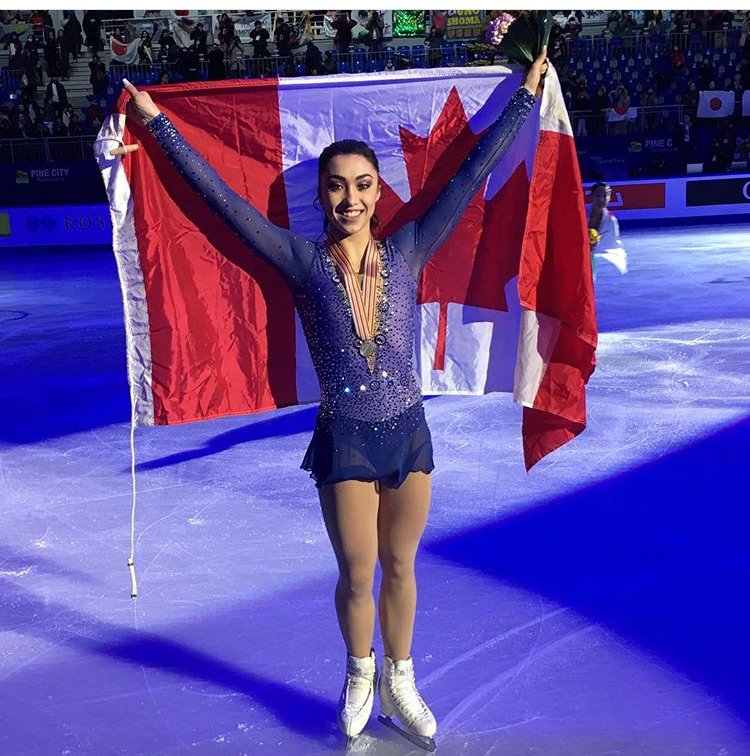 The 2015/2106 season with my new coaches went well. I had been skating well at my fall competitions leading up to 2016 Worlds that year. At the Skate Canada Challenge I scored 193 and at my Nationals I achieved 197, placing 2nd. So I knew if I could repeat those performances I would be able to score well.  My main focus though was not on placement but to go out and perform two clean programs and then let the scores follow. I stayed away from the media and thinking about placement as I wanted to ensure this didn’t take away from my focus and goals.  When I heard the short score I wasn’t just happy, but I was relieved that I finally performed the program internationally, the way I knew I could.  Then I got to see the marks that followed.  I then had to collect myself for the freeskate, as I knew that if I skated it the way I did at Nationals I could place well, but again I couldn’t focus on the marks, but each element in my program.  I scored new personal bests in the both the short and freeskate and placed 9th in the World. It felt like a break through being in the top 10.

Again I went into the summer with a lot of momentum and was feeling really good.  Training was going really well, but I switched training shoes which aggravated my left foot where I have arthritis in my first metatarsal.  The doctors didn’t give me a specific diagnosis and I ended up spending four weeks in a boot and no skating.  I was going to the Canadian Sports Institute of Ontario for conditioning to use their underwater treadmill to keep up my fitness.

My first competition last season was Neblehorn Trophy in Orberstdorf, Germany where I placed 3rd.  Next was Skate America where I placed 4th.  My coach and I then decided to switch up the jumps in my short program, putting my triple toe – triple toe jump back in as I have the best toe-toe in the world.  In the short at Trophee de France, in Paris I scored over 72 points which is very good score and was the first women in the world to receive all plus 3s for grade of execution on a triple-triple jump combination.  I was second after the short, but unfortunately I fell on the soft ice in the freeskate and placed a disappointing 4th.  I then went to the Skate Canada Challenge to gain some more mileage on my programs before Nationals and had two very good skates and set a new Canadian record for combined score. Then at Nationals I went out again and skated two very good programs and won my 4th silver medal.  Heading into the Four Continents Championships I knew that if I skated the way I did at Nationals that I had a very good chance of winning. Going into the short I had a clean program and was in first place. An unfortunate error in the freeskate left me in second place overall. There was a lot of mixed emotions with this medal, because I knew I was the first lady from Canada to win a medal at the 4CC since 2009, but at the same time I was so close to winning.

I again took this experience and focused on knowing now that I was a medal contender at the 2017 World Championships. Everything was going great until the first weekend in March. I was sitting watching TV with my family and got up to go get some water when I fell down with pain in my lower abdomen. We eventually went to the hospital where I spent the night in the emergency room.  It was determined that I had a cyst on my left ovary that ruptured. I was not allowed to train for several days that week and I had to take it very easy. I was still not feeling well and then it turned out that a urine test my doctor took from me on that Monday tested positive for E coli infection and I was placed on antibiotics on the Friday. I still had to be admitted to the hospital again that weekend because I had taken so ill, lost 10 pounds, and was placed on intravenous to get the antibiotics in to my system. The following Wednesday I was able to get back on the ice and by Friday I was doing full run throughs of my programs. My coaches were great with me and were a huge support through all of this. I was so panicking, because of the lack of training to this point before Worlds. They just told me to trust my training and that I had built up a good base before the illness.

The week before leaving for Worlds I felt great and training was going very well. I was once again feeling like I could stand on the podium. The next week at Worlds, everything was going great at practice and I was feeling calm and confident. In the short I skated a clean program and placed 3rd.  In the freeskate I was skating second last after the World Champion, Medvedeva. She had just skated a clean freeskate herself and set a new World record. I remember clapping for her while I was on the ice waiting for them to announce my name. Then I went out and skated a near perfect skate, with a minor step-out on my last jump. Then I heard my score and I knew that I was on the podium. It was such an amazing feeling.